Identity Evropa (IE)  is a racist “Identitarian” organization that attempts to promote a clean-cut, respectable face, while their members are time and time again exposed promoting a vast swathe of bigoted views wrapped in white supremacy. The chat logs leaked by Unicorn Riot back in March, just days before IE’s national conference in Kentucky, shed light on their membership’s racist, antisemitic, trans-phobic, misogynist, homophobic, and xenophobic views. Identity Evropa is most well known for their role in facilitating 2017’s deadly “Unite the Right” rally in Charlottesville, VA. On the Friday of IE’s 2019 conference, the organization’s third leader, Patrick Casey, announced that the group was now named the “American Identity Movement” (AmIM), rebranding in an attempt to lose some of the organization’s stigma.

In actuality, this is just yet another rebranding, the last being from The National Youth Front to Identity Evropa – both of which headed by Nathan Damigo. The National Youth Front served as the youth wing of the neo-nazi American Freedom Party, which is headed by long-time white supremacist William Daniel Johnson, a wealthy corporate lawyer. William Johnson was also named on the official delegate list for Trump’s 2016 Republic National Convention. But guess what, the American Freedom Party was yet ANOTHER REBRAND in this history of rebrands, from the group’s former name- the American Third Position (A3P). And wouldn’t you know, American Third Position was just another rebranding of the Golden State Party born directly out of the Cali-based white power skinhead group Freedom 14, named in reference to the “14 word” slogan of neo-nazi notoriety produced by David Lane.This incessant shell game attempting to obfuscate their glaring neo-nazi reality is obvious to antifascists and antiracists who pay attention, and it all leads to the organization currently known as American Identity Movement.

Nathan Barker isn’t the most prolific member of American Identity Movement, but he makes up for his lack of original content by donating to the organization regularly, and hitting the re-tweet button anytime Patrick Casey or any other nationalist CHUD on Twitter decides to spew hate-speech. Nathan Charles Barker loves LARPing as his dead confederate ancestors whenever he can (or whenever his racist dad isn’t forcing him to LARP on the Union side), and enjoys dressing up in a sports jacket and stone washed jeans in a failed attempt to improve the public view of his bigoted organization. 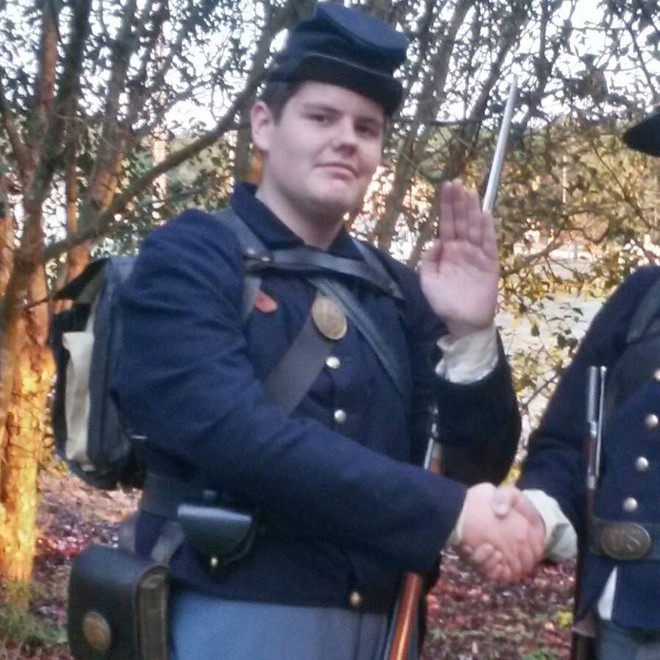 Everyone say, “Hi there, Bootlickin Barker!” 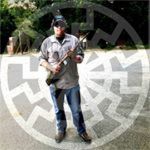 Here Nathan overlays a black sun on his photo of himself with an airsoft rifle. 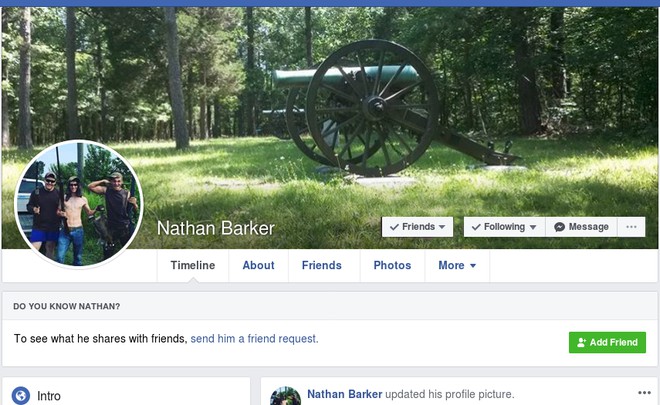 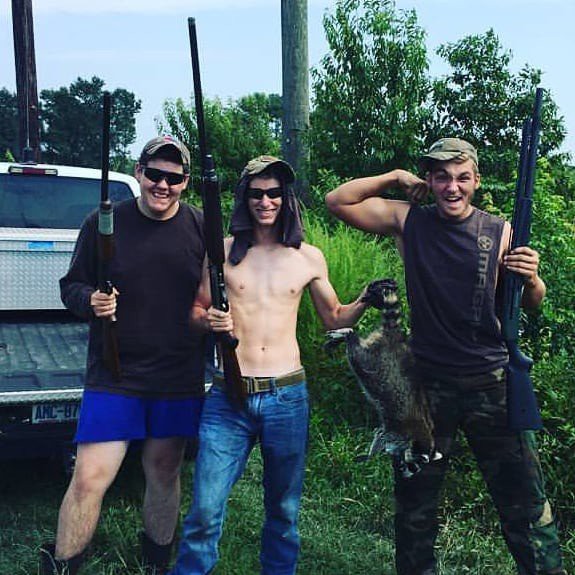 Since the recent aforementioned rebranding of Identity Evropa (IE) to American Identity Movement (AmIM), the group has been struggling with a steady decline in membership and issues securing the identities of it’s remaining participants. Nathan Charles Barker hasn’t made this any easier for them. By using his legal name on IE/AmIM’s leaked discord chats, Facebook profile and Instagram, Nathan has left an electronic paper trail easily connecting all of his identifying user accounts. Moreover, Nathan Barker uses his first name, favorite confederate meme imagery, and written confirmations of specific AmIM events on his twitter account, then goes on to confirm the same “activism” with AmIM in the discord chat logs as well. He even uses the same descriptive wording on both accounts to describe how “brilliant” the so-called AmIM activism is. 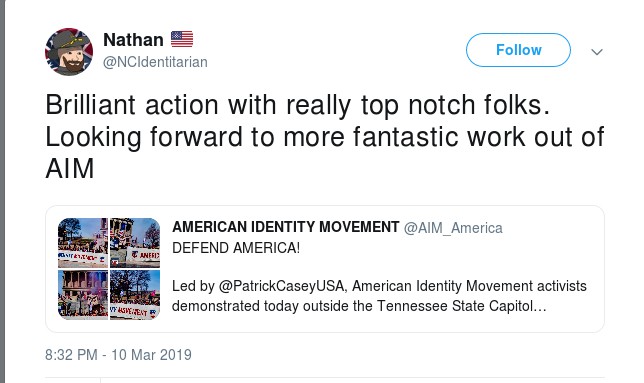 Oh, whats that avatar we see?… 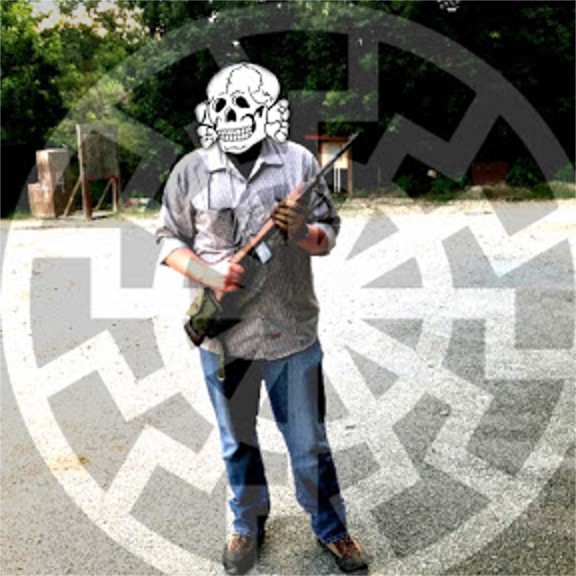 Oh, it’s Nathan using that black sun photo and trying to superimpose a totenkompf over his face for anonymity. 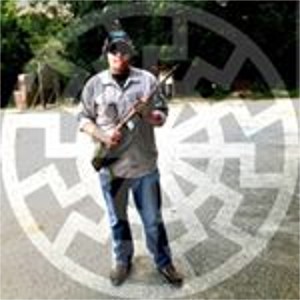 Nathan comes from a long line of confederate family history which has laid the groundwork for his most recent foray into racist organizing. Make no mistake, American Identity Movement seeks to influence a generation of disenfranchised poor southerners who have been left behind by a rapidly changing world- just as other fascist and neo-nazi organizations like the League of the South, Identity Dixie, and the KKK do, while more directly targeting younger white men. Nathan’s father, Eric Barker, has been integral in grooming his son and advancing the current, twisted world-view Nathan holds. This racist priming has precipitated a group like AmIM’s ease in exploiting Nathan in furtherance of their own goals of a divided and segregated nation upholding white supremacy. But alas, Nathan is an adult and willing participant in this ideology and its furtherance through action. Through years of confederate battle re-enactment and military worship, an heirloom has been passed down from father to son. That heirloom is bigotry and racism. 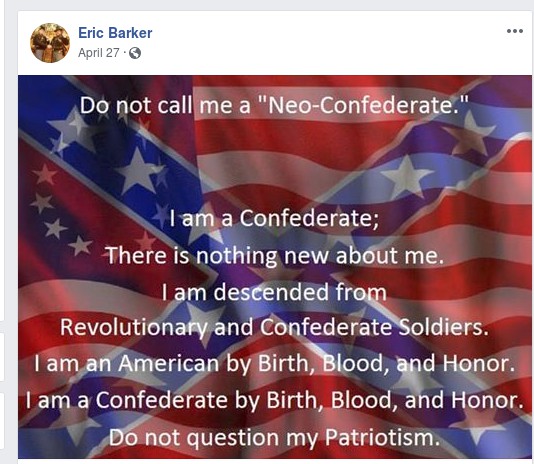 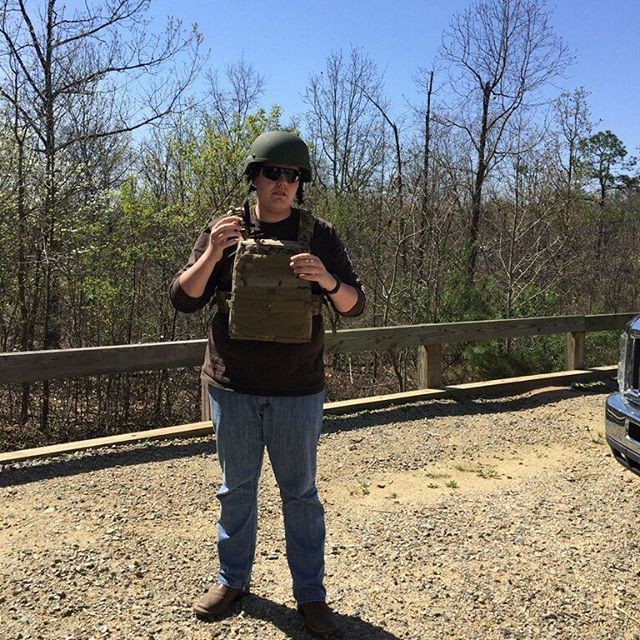 Nathan graduated from Grays Creek High School in 2017. During his high school years he spent lots of time at the rifle range owning the libs, working the front lines as a fry commando at the Hope Mills Zaxbys, and keeping his eyes closed during photos. 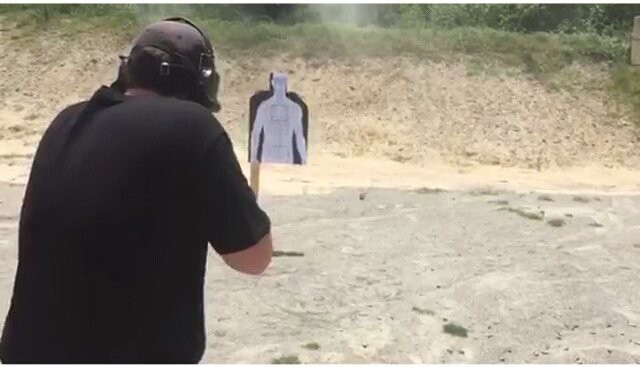 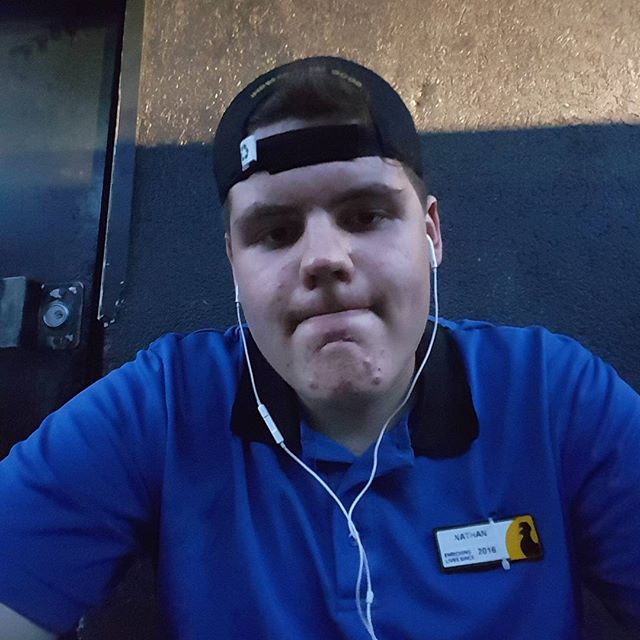 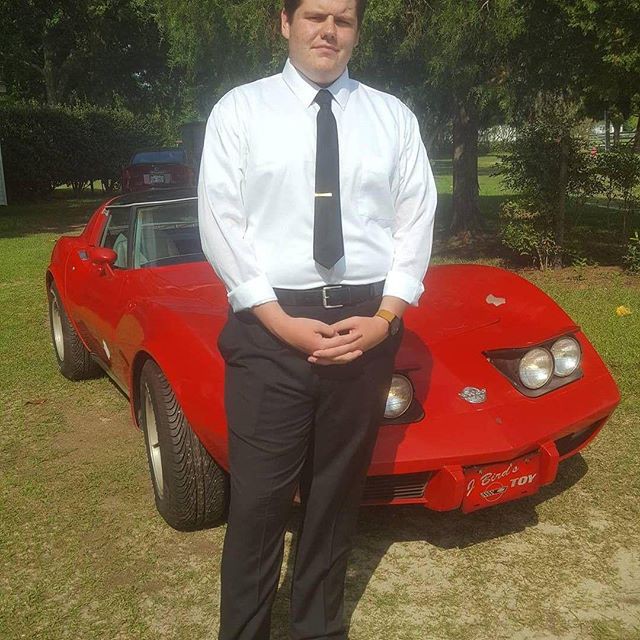 Nathan with the sun in his eyes, posing in front of the family jewel. Notice the plate name “J Bird’s Toy”, and the private road his family lives on of the same name.

Since the inception of Nathan’s membership in Identity Evropa beginning in late summer of 2017, Nathan has furthered the cause of the organization by re-tweeting literally everything Patrick Casey and AmIM can muster. Apart from his obsessive and bot-like re-tweeting, Barker has sparingly summoned a few words of his own, mostly in leaked discord chats. Here, Nathan praises the works of racist eugenicist Madison Grant. Nathan also has his very own original views on immigration. And just when you thought nationalist Nate bootlicking Barker couldn’t get any worse, he goes ahead and spills the beans on how he views Appalachia. 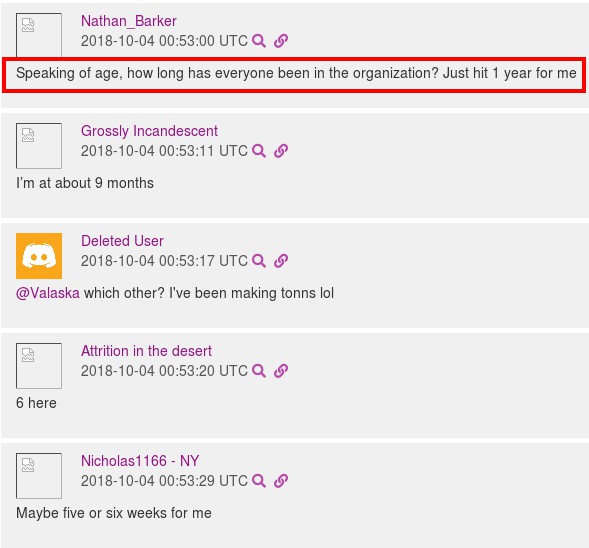 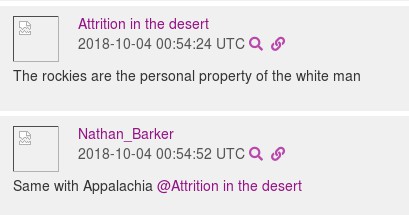 Nathan makes up for his lack of ability to create original content for his alt-right bigot club by sucking up to it’s leader Patrick Casey. But don’t be fooled, Barker has a few  original thoughts from other people he feels compelled to share. Here he re-tweets infamous former grand wizard of the Ku Klux Klan, David Duke. Nathan Barker has no problem sharing theories on perceived racial differences, ideas on gender roles, and antisemitism to boot. Looks like Nate is shaping up to be one colossal NAZI! 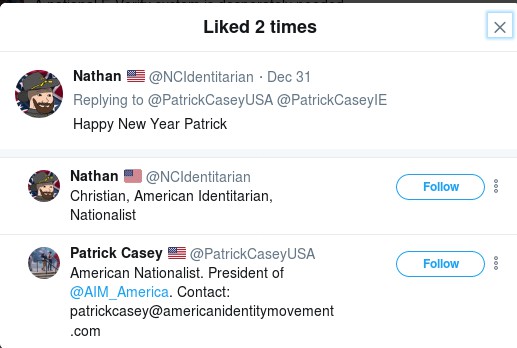 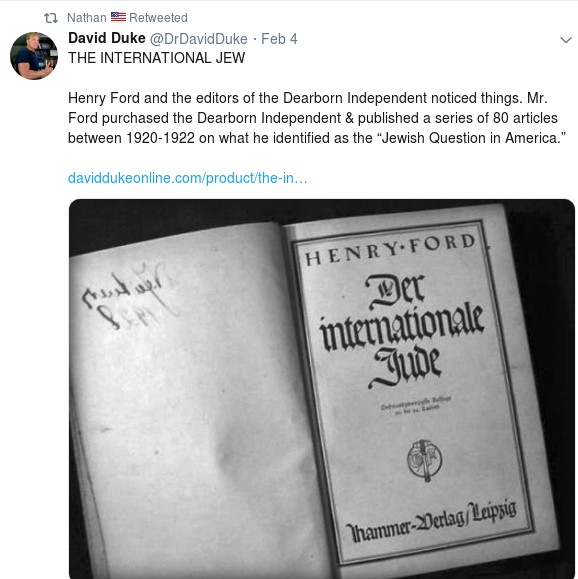 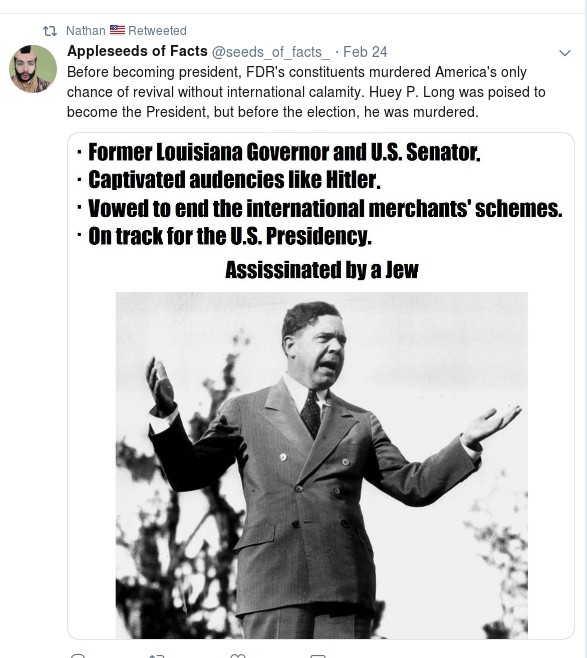 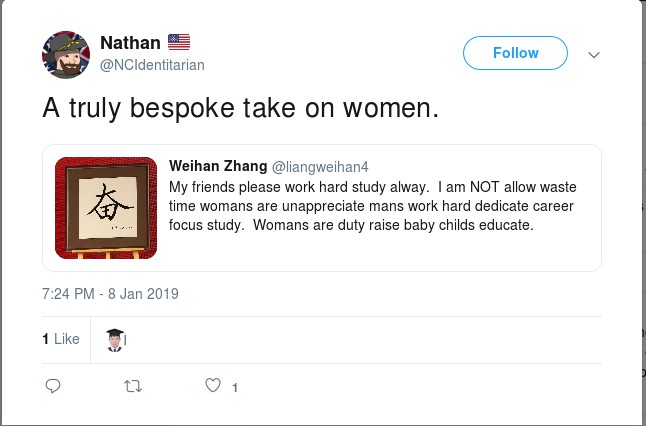 On Nathan’s Facebook page ,which will likely be shutdown soon, he “likes” many different military simulation pages. Along with civil war re creationist pages he also “likes” several alt-right pages.  One of these include “Murdoch Murdoch”, a poorly put together antisemitic and racist cartoon using internet memes popular with fascist keyboard warriors. This content is regularly de-platformed on YouTube for breaking the terms of service agreement, but quickly reposted by other neo-nazis.  This internet cartoon celebrates and encourages lone wolf style shootings against minorities like the church attack by Dylan Roof in Charleston, the deadly shooting at the Pittsburgh synagogue, and the infamous mosque massacres in Christ Church, New Zealand.

In addition to his social media presence, Barker has also been identified at Identity Evropa and American Identity Movement activism events. Along with attending fireside chats, private sessions for members of IE/AmIM to listen to Patrick Casey talk mostly about himself and a little about the direction the organization is headed, Nathan has been spotted at IE/AmIM’s 2018 “Leading Our People Forward” conference in Kentucky. Nathan Also attended and participated in American Identity Movement’s “Down With Globalism” event in Nashville TN March 2019. He can be seen below holding one of the banners. 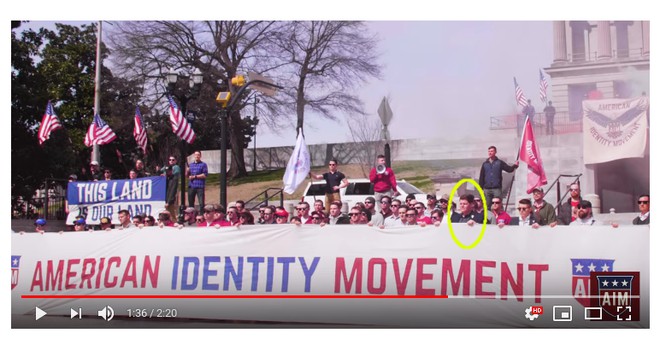 Nathan Barker participating in the Nashville, TN AmIM demonstration in March of 2019. 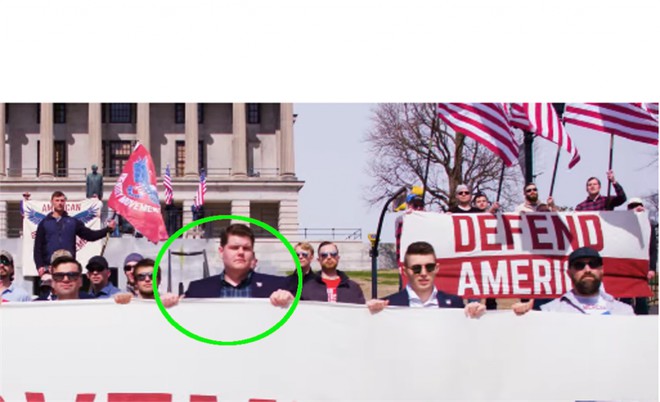 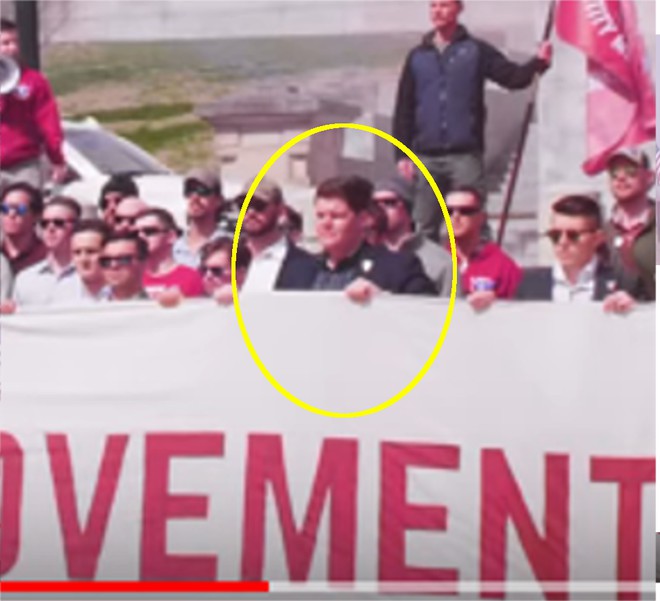 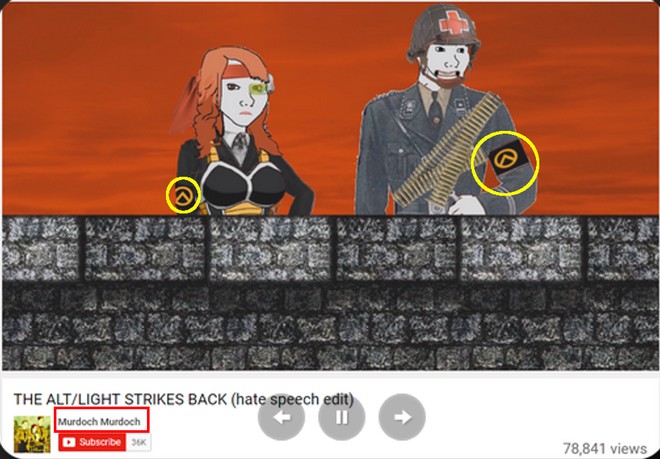 As proven above, Nathan Barker has shown his willingness to actively participate in and further the goals of a racist, white supremacist organization. In addition to his organizing, he espouses vile beliefs or parrots those of others to spread a message of hate. Although it seems quite plain to assume, we will say it anyhow: any individual who threatens the safety and integrity of our global community is a problem. They are our problem, they are your problem and the disease they spread must be stopped immediately. Our passion for antifascism naturally leads us to our continued stance of militant no-platforming for individuals like Nathan Barker and the ideological organizations they claim.

If you have any tips/information you’d like to share with us, reach out via email at ashevilleantiracism@riseup.net. And remember, don’t give him an inch.