This article is republished, with permission, from Antifa Sacramento. 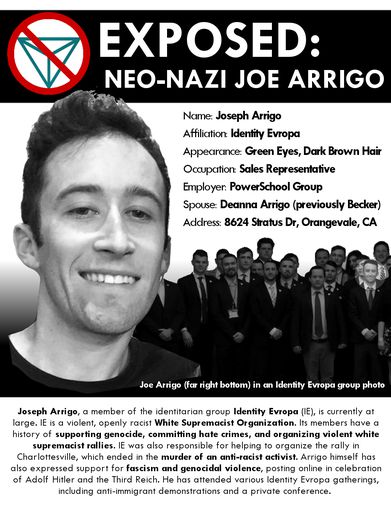 A printable poster with all the key info on Joseph Arrigo.

Joseph Arrigo of Orangevale, California (a suburb outside of Sacramento) has been identified as a member of the alt-right group Identity Evropa (IE). Arrigo has been with the group since 2017, and has been documented attending their events and posting disturbing far right material online.

Arrigo works as a sales representative for the PowerSchool Group, a K-12 education technology provider located at 150 Parkshore Dr in Folsom. Please contact them and alert them that their employee is a white supremacist!

Demand that the PowerSchool Group fire Joseph Arrigo immediately. You can call his workplace at:

It is unnecessary to provide any personal details about yourself when you call- this is a one way exchange of information. You can block your number (#67 before phone number). Keep it short, just hang up!

“Hello, I’m calling because an active white supremacist is employed at your business. His name is Joseph Arrigo and he works as a sales representative. Is PowerSchool Group aware of this? Fire him immediately given PowerSchool Group’s mission and what you represent.” 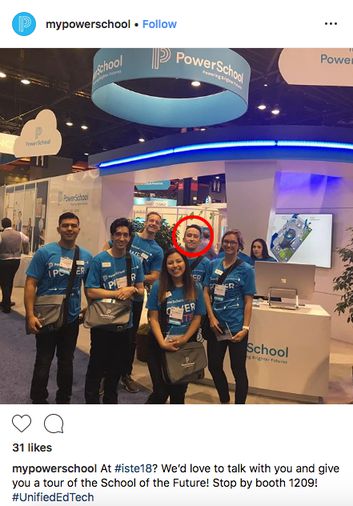 Arrigo serving as a public representative of the PowerSchool group, as featured on the company’s official Instagram. 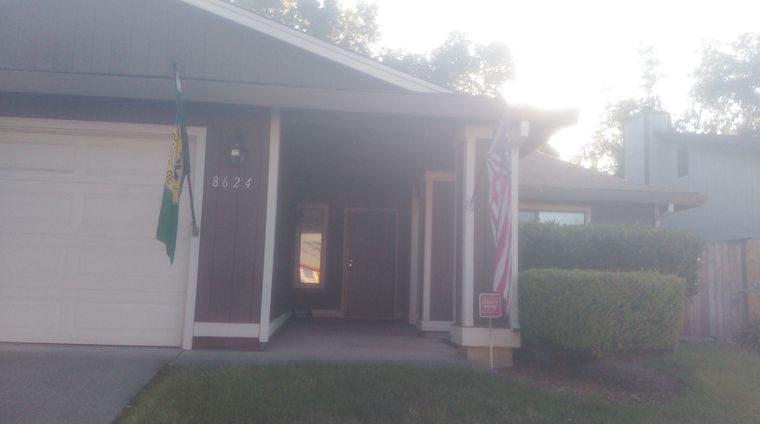 Joseph Arrigo’s house, which features a “Welcome to the Arrigo’s” sign and a State of Jefferson flag. The State of Jefferson is a conservative separatist movement in Southern Oregon and Northern California that has some overlap with the far right.

Identity Evropa is a white supremacist organization with a membership base across the United States. The group’s ideological platform is white identitarianism, a subset of white supremacy that calls for the creation of an all-white nation state. Identity Evropa is classified as a hate group by the Southern Poverty Law Center. The group has attempted to appeal to a wider audience by obscuring their racist and genocidal beliefs with a facade of professionalism- Identity Evropa primarily recruits young white men off college campuses, hosts “days of service” where members pick up trash and distribute food to the homeless, and has abandoned the traditional neo-Nazi skinhead style in favor of suits and ties. Underneath this carefully curated appearance, however, is a history of unapologetic fascism and racist violence.

Identity Evropa was founded by Nathan Damigo, a military veteran who served 5 years in prison after robbing a cab driver at gunpoint for “looking Iraqi”. After his release, Damigo hosted an alt-right podcast and later served as chairman of the National Youth Front, a position he acquired after the previous chair was forced out with death threats over his interracial marriage. He made connections with various white supremacist leaders across the country including Matthew Heimbach and Richard Spencer, and eventually founded Identity Evropa with hopes that the organization could become a “respectable” face of white nationalism. Identity Evropa took inspiration from the staunchly racist and xenophobic Identitarian movement in Europe, and quickly began building its membership base in the US, hosting anti-immigrant demonstrations and putting up subtle propaganda in cities across the country. Identity Evropa was also one of the key groups that organized the Unite the Right rally in Charlottesville, VA. The two day rally began with a torch-lit march reminiscent of a KKK gathering, where marchers chanted the Nazi slogan “blood and soil” and surrounded and attacked a small group of people of color. The second day ended with a white supremacist ramming his car at full speed into a crowd of counter-protesters, killing one anti-racist activist and injuring many more. Damigo left Identity Evropa soon after the Unite The Right rally in an attempt to preserve the group’s reputation. Around the same time, a photo of an Identity Evropa member at the torch-lit march went viral, and the group stopped wearing their signature outfit (a white polo shirt with the Identity Evropa logo) to further distance themselves from the violence at the rally and the public outcry it resulted in. Identity Evropa is one of several groups that are currently facing a lawsuit for their participation in organizing the Charlottesville rally. 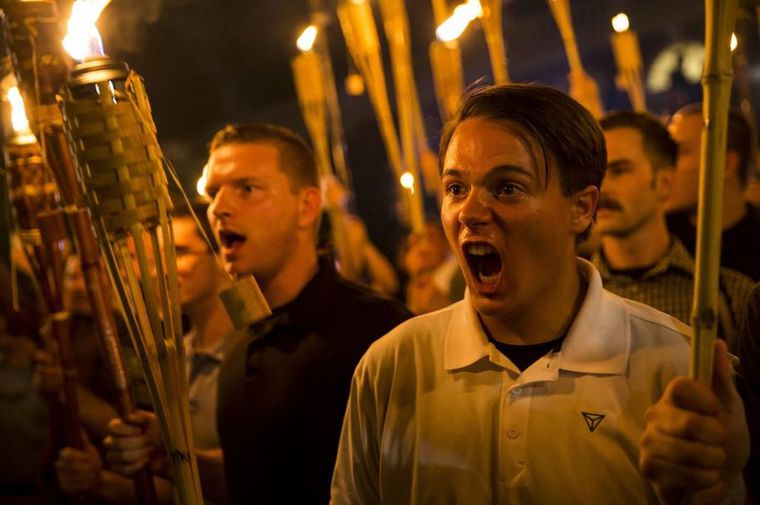 The viral photo of an Identity Evropa member marching in Charlottesville.

Joseph Arrigo’s involvement with Identity Evropa dates back to at least July of 2017. It’s unclear when exactly Arrigo became an official member, but on July 8th he was spotted attending a nationalist rally in Sacramento with other Identity Evropa members. He later posted a photo to twitter that featured himself and Nathan Damigo standing together at the rally. 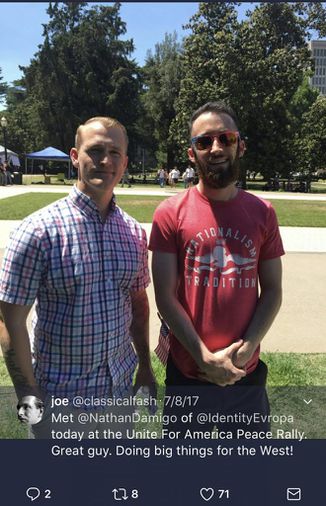 Arrigo posing next to Identity Evropa’s founder, Nathan Damigo. The photo was posted to his Twitter account, @classicalfash.

Arrigo’s connection to Identity Evropa was further solidified on December 16th, 2017, when he showed up to an anti-sanctuary city demonstration in San Francisco with other IE members. Arrigo tried to keep a low profile, but never left the Identity Evropa contingent that day. At this point it became clear that he was officially part of the organization. 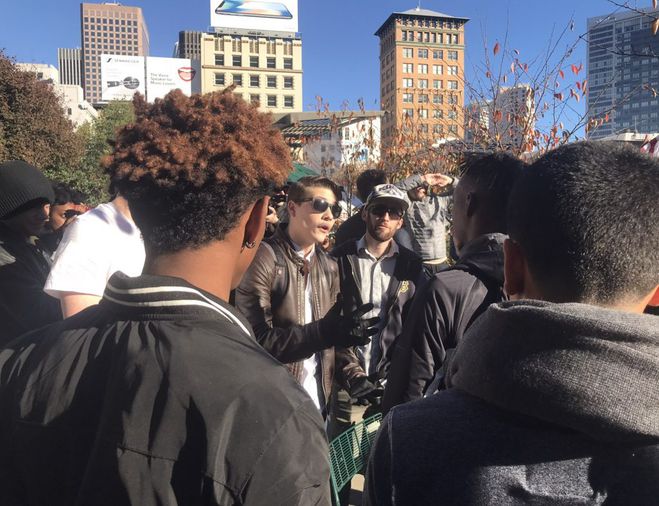 Joseph Arrigo (center right) with a baseball cap and sunglasses on at the anti-sanctuary city demonstration in SF.

The December rally brought out other white supremacists like Patrick Little of Albany, CA, who just recently had an unsuccessful political run for Senate, and Christopher Locke from Roseville, CA, an overt neo-Nazi who spent over a month in 2017 terrorizing a reproductive health clinic in Sacramento. Sacramento and Bay area Proud Boys also made an appearance, along with other far right and anti-immigrant demonstrators.

Then, a few months later, Identity Evropa held their first national conference. It was hosted in Nashville, TN, and nearly 70 IE members attended the event- Joseph Arrigo among them. The conference featured speeches from a variety of white supremacist icons, including American Renaissance editor Jared Taylor and former Ku Klux Klan lawyer Sam Dickson, both of whom are members of the Council of Conservative Citizens, the white nationalist hate group that inspired Charleston church shooter Dylann Roof. Taylor praised IE members for being “smart, committed, sensible, and impressive in every way.” 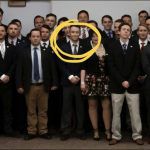 Arrigo pictured in a group photo taken at the Identity Evropa conference.

Arrigo also has an active alt-right internet presence. He co-hosts the weekly Identitarian podcast Identity Rising and also has his own podcast, Operation Mockingbird. Stephen McNallen appeared as a guest speaker on one of the more recent episodes of Identity Rising. McNallen is the leader of the Asatru Folk Assembly (AFA), a white supremacist variation of the Asatru pagan religion. Over the past few years, AFA has been kicked out of most pagan and heathen conferences and circles for their open embrace of white supremacist ideology. McNallen and Asatru Folk Assembly are connected with the Golden State Skinheads, the neo-Nazi gang responsible for stabbing multiple anti-racist protesters at their 2016 rally in Sacramento. 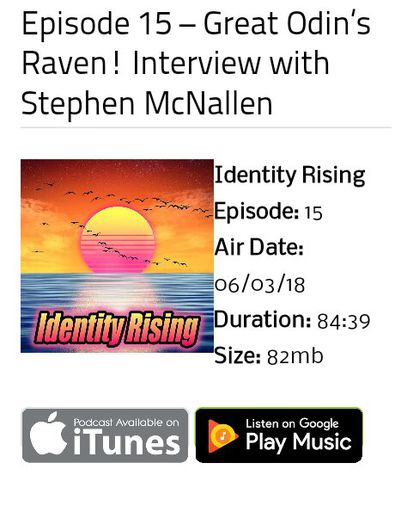 His activity on these accounts leaves no room for doubt about his personal beliefs: 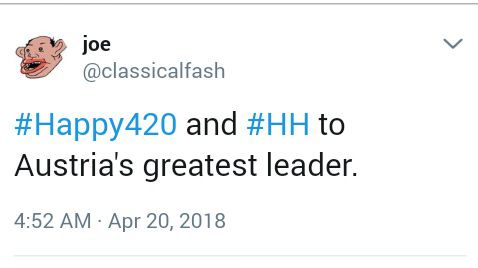 Arrigo expressing his admiration for Adolf Hitler, whose birthday falls on April 20th, in a post on his Twitter account. #HH presumably stands for “heil Hitler”.

Have more information on Joseph Arrigo or other local fascists?
Email us at antifasac@riseup.net