This article is republished, with permission, from Northern California Anti-Racist Action.

In March of 2019, the independent and non-profit news organization Unicorn Riot released the latest set of chat logs from a variety of white nationalist, Alt-Right, and neo-Nazi groups – many of which organized the Unite the Right rally in Charlottesville.

One of those groups was Identity Evropa, now rebranded as the "American Identity Movement." Discord is an online platform used primarily by video gamer players because it allows them to talk with each other while playing video games. In recent years however, it has become a favorite platform for the Alt-Right, and was used heavily to organize the Unite the Right rally that led to the death of Heather Heyer on August 12th, 2017.

One of the central organizers of the Unite the Right rally, was none other than CSU Stanislaus student, Nathan Damigo, who is now implicated in a lawsuit stemming from the racist event. Richard Spencer, one of the most notorious white nationalists in the US who was supposed to speak at the demonstration, said of Damigo: "I’d love to take credit for it [Unite the Right], but it was more Nathan."

But by the time that Unite the Right took place, Damigo was already well known on the Turlock campus, as he had made headlines for leading Identity Evropa, putting up flyers and posters around campus, and also attacking a young woman in Berkeley at a demonstration on April 15th, 2017. In response, CSU Stanislaus students organized a series of protests, demonstrations, and disruptions of school events to push for Damigo to be removed. In response, or lack thereof, from the CSU administration was deafening, and the campus refused to expel Damigo, much less admit that there was active Alt-Right organizing happening on campus.

In response, Damigo wrote in the Discord chats that Alt-Right, neo-Nazi, and white nationalist student organizers should follow his example and not be afraid. – it’s not like the school administration would come after them. He wrote:

"I still haven’t been kicked out…," says Nathan Damigo of CSU Stanislaus.

After Unite the Right and continued pressure from students, Damigo took a series of online classes and quietly graduated. However, he wouldn’t be the last student at CSU Stanislaus to become part of Identity Evropa.

On January 13th, Christopher Thompson, posting as "Chris N," announced himself to the Identity Evropa server. He wrote of himself that he was 18, a good student, an orchestral violinist, that he even went to Harvard for a summer semester when he was 16, and now – was majoring in finance. He complained about the students around him, how non-white CSU Stanislaus was, and that his father made too much money for him to apply for assistance. Thompson said he was "red-pilled," (brought into the Alt-Right), like many other young men, through watching YouTube videos by white nationalists like Jared Taylor and others.

Thompson also said that while at CSU Stanislaus he was keeping his head down, especially since the campus was already known to be associated with IE activity after Damigo’s tenure. But Thompson went on to state that he was in fact already a member of the student government and was planning to run in the April elections. Thompson stated his goal would be to "cut funding" to "diversity and multiculturalism" events. By this he means; anything not having to do with the "white race." 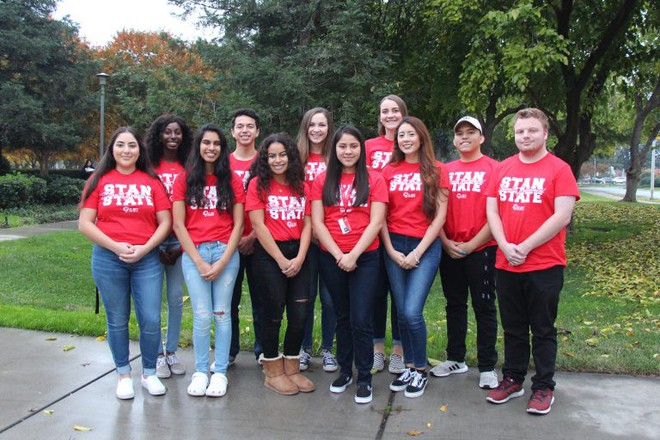 To find Christopher Thompson from "Chris N," antifascist researchers first looked at Chris’ first clue he left us: that he was in student government. Being that there are few men that were on both the elected student government and the appointed Student Government Leadership Council (SGLC), we had a good idea that "Chris N" was the "pretty recognizable" redhead that looked 18.

After verifying and checking with students on campus, we soon learned that "Chris N" was in fact, Christopher Thompson on the SGLC, which is described as a "10-week introduction and leadership development program…[to] get hands on experience working with ASI Student Government."

Photos and Christopher Thompson’s name also came up in articles from the Stockton Record, detailing how Chris had participated in various activities through the Venture Academy school in Stockton, California. 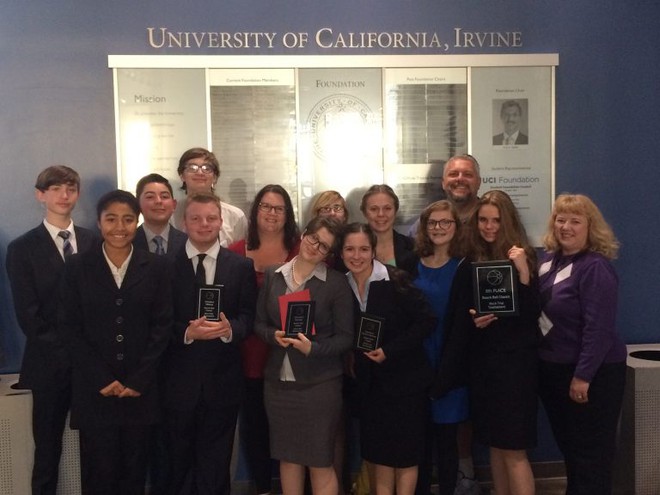 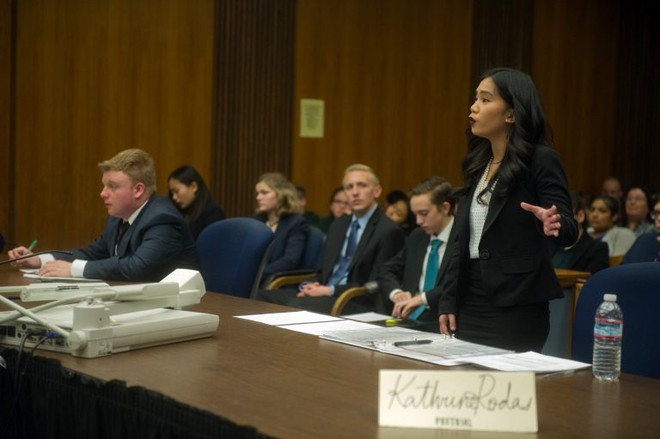 Thompson also posted a screen shot of an event at CSU Stanislaus, complaining about it. 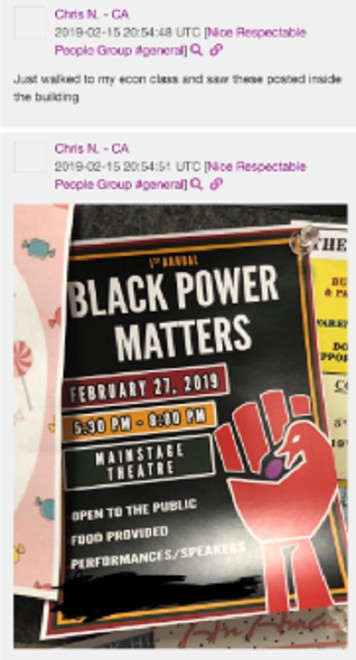 Antifascists then cross checked Thompson’s classes that he complained about within the Identity Evropa discord chat logs and compared it to the current course book on the CSU Stanislaus website, easily finding it was indeed a match with an Environmental Law class.

After corroboration from sources on the campus who also IDed Thompson going into the same class, we were certain that Thompson was in fact "Chris N" from the Identity Evropa logs. However, there was more evidence: the fact that Thompson was running for office.

In the Discord logs, Thompson stated twice his intention to run for office and then use his position to defund and strip away money for groups made up of students of color. We were able to verify with students and staff on campus that Thompson was indeed running for the office of director of the college of business. On April 15th, The Signal, the CSU Stanislaus student newspaper, ran an article on the candidates, listing "Christopher Thompson" as one. The question now is: how will students respond?

Why Is Stan State Silent?

Directly after the Unicorn Riot Discord logs went online, the SGLC page on the Stan State website went down, showing a 404 – Page Not Found error message, while another page was soon linked. But while other student government pages featured bios and photos of student leaders, the SGLC, the student group that Christopher is a part of, simply featured a photo.

As news of the Discord leaks grew and newspapers and press outlets around the country began to report on Identity Evropa organizers infiltrating everything from police agencies, the military, to political parties, CSU Stanislaus stayed quite and refused to put out a statement, even alerting students of Christopher’s intentions to "defund" their campus organizations if elected.

This lack of transparency and accountability has been the MO of the campus administration since Identity Evropa/AmIM first began putting up Alt-Right flyers and stickers there in 2016. First the campus denied that Damigo was putting up materials. Then, as a deflection, they stated that he was "being investigated," when in reality, this was in reference to the events in Berkeley on April 15th being looked at by police, who of course did nothing. When students rallied and demanded Damigo be expelled, the campus refused to acknowledge that he was even putting up stickers and posters, while the entire campus knew otherwise. Some teachers even invited Damigo, who became a white nationalist after reading David Duke’s autobiography in prison when doing time for carrying out a hate crime against a cab driver, into their classrooms to debate.

In 2019, another member of Identity Evropa and a non-student was even stopped while putting up stickers and posters in broad day light, and the campus refused to release his name to the public.

Despite a constant stream of declarations about "diversity" and being an inclusive campus, the administrators of CSU Stanislaus have done nothing to alert a student body made up largely of students of color, about an organized racist threat that is using CSU Stanislaus as a place to organize out of and in fact, who’s members have even been put into position of power.

If students sit by and do nothing, they may even help elect one.