With Friends Like These… Beacon Hill White Nationalist Organizers Exposed

This article is republished, with permission, from Puget Sound Anarchists. 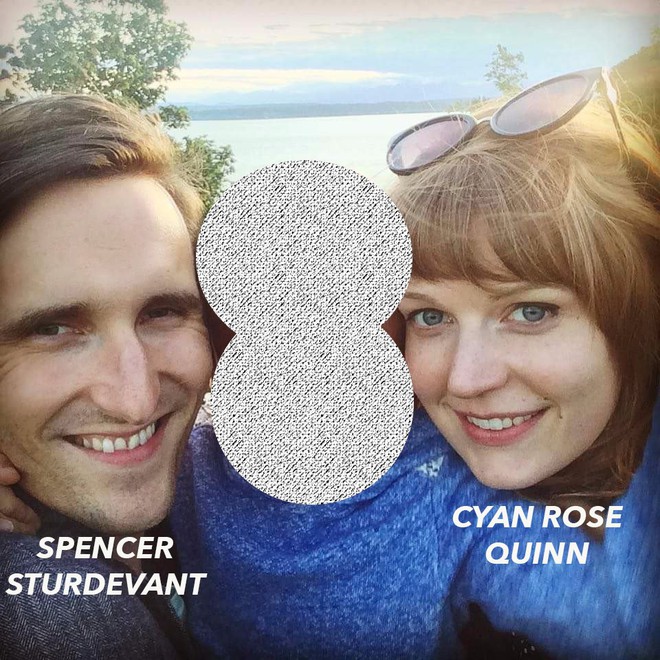 The Northwest Forum is an exclusive event hosted by white nationalist Counter-Currents Publishing. In the past, Counter-Currents has hosted notorious racist Jared Taylor, disgraced neo-Nazi lawyer August Invictus, Identity Evropa founder Nathan Damigo, and Seattle’s own Nazi-ceramicist Charles Krafft. The 12th Northwest Forum is to be held in the Seattle area, and renowned Holocaust denier and anti-Semite David Irving will be speaking. One of the main organizers is an unassuming woman who lives in the Beacon Hill neighborhood and who at one point was deeply embedded in Leftist and social justice networks in Seattle. Her husband, a stay-at-home-dad and former organizer for the radical Left, is the main WA organizer for a national scale white nationalist organization currently being sued for their involvement in the murder of Heather Heyer in Charlottesville, VA in 2017. Their names are Spencer Sturdevant and Cyan Rose Quinn.

Spencer Sturdevant and Cyan Rose Quinn are racist, immigrant-hating organizers inside the far Right that you should know about. You should know about them not only for their disgusting beliefs, but because they once called themselves a part of the Left and worked closely with anarchists and other radicals in the Seattle area. From 2009 to early 2013 they flitted in and out of different Seattle radical organizations like The Seattle Solidarity Network (SeaSol), the local branch of the IWW and the Seattle Pacific University student-group Student Worker Solidarity. When their child was born they maintained ties with other radical parents and even traded babysitting. They attended parties, social events and stayed connected to friends through social media even as they fell out of the political Left.

In 2012 Spencer Sturdevant and Cyan Quinn had a falling out with other organizers in these Leftist groups and eventually departed from all Leftist organizations. Spencer Sturdevant maintained a presence in the Left-Communist milieu mainly through on-line posts on known websites all the way through 2015. Cyan Quinn remained in the background and did not present herself as a particularly involved or engaged person.

Spencer Sturdevant’s posts on Left-Communist oriented Facebook groups and websites such as Libcom.org started to take an ironic and confusing turn. Easily and unfortunately brushed off by those around him as a sort of twisted humor, the real public defamation began in 2015 when Spencer Sturdevant started to post outright support for Trump and virulent anti-immigrant and refugee stances. During this time Cyan Quinn repeatedly claimed that his Right leaning politics were a misunderstanding to his old friends on the Left.

By day Cyan Quinn works at State Farm Insurance Agency, but she is also the online personality Samantha Hilton, an avid racist and the coordinator for the Northwest Forum. Her husband, who the Beacon Hill neighborhood knows as Spencer, also spends his time online as Niko Stavrogin (Facebook) (Twitter), and Niko WA on the Identity Evropa Discord server. He is the Washington coordinator for Identity Evropa. They have both been playing a double-life for years. 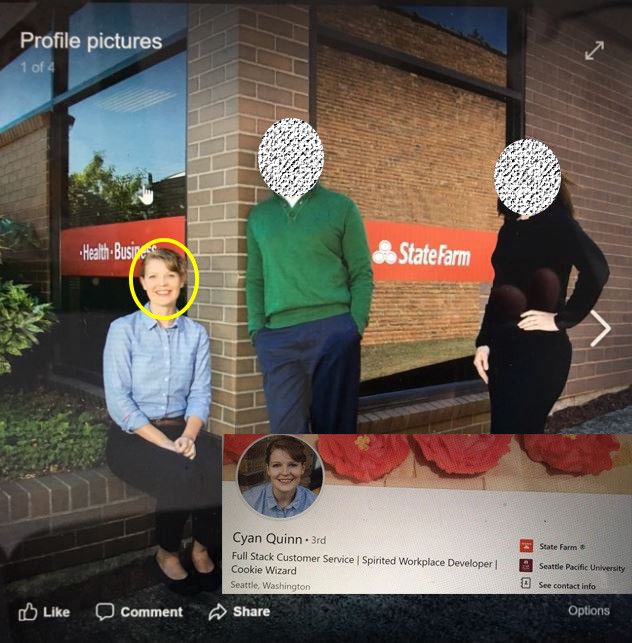 Samantha Hilton is the name Cyan Quinn has been using to run her organizing work for the Northwest Forum(Facebook Link Archive). She has written several articles for Counter-Currents, the Seattle based media group responsible for hosting the Northwest forum. Counter-Currents is run by Greg Johnson, exposed Seattle white nationalist. Cyan Quinn’s Counter Currents articles detail Samantha Hamilton traveling to the American Renaissance conference, and alludes to a road trip to the 2018 Identity Evropa gathering in Kentucky. Cyan Quinn//Samantha Hilton often speaks of a personal and close relationship with Greg Johnson and refers to herself as a conference organizer. The upcoming annual conference was recently announced by Samantha Hilton on Counter-Currents.

Kibbles is the online username that Cyan Quinn/Samantha Hilton uses to talk to her white nationalist buddies on the Identity Evropa discord server, as well as other platforms. Kibbles also works in insurance. She only has a few messages on the Identity Evropa discord, but kibbles was prolific on a different server called the ‘The Silver Guild’, a chat made by Traditionalist Workers’ Party member Derrick Davis. ‘The Silver Guild’ acts as a chat for employers and employees within the U.S. white nationalist scene, an employment source of sorts. In the days immediately following Unite The Right 2017, when many fascist attendees lost their jobs due to public doxxing, there was a surge of posts of members of ‘The Silver Guild’ asking for employment leads. 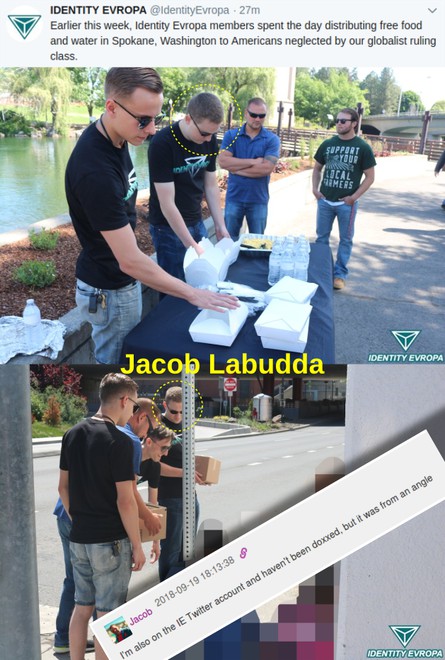 An avid propagandist, Spencer Sturdevant had a run in with international antifascists visiting Seattle while wheat-pasting with Identity Evropa prospects. Upon confrontation, Spencer Sturdevant fled the scene, abandoning the new recruits. From all accounts bravery was never his strong suit, whether a part of the Left or Right. Spencer Sturdevant has been photographed since 2017 at different public Alt-Right rallies across the Seattle area, starting with the Patriot Prayer rally in downtown Seattle on August 13th, 2017, the day after Charlottesville. 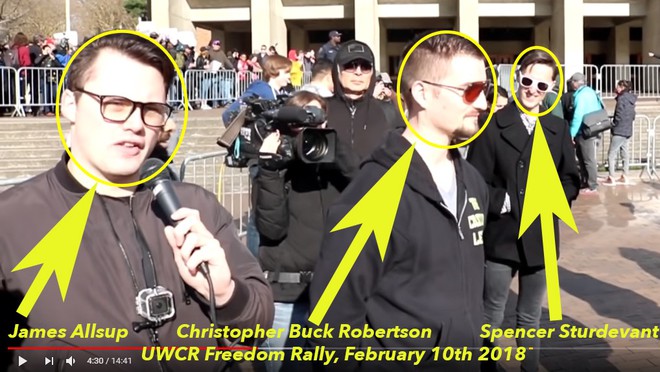 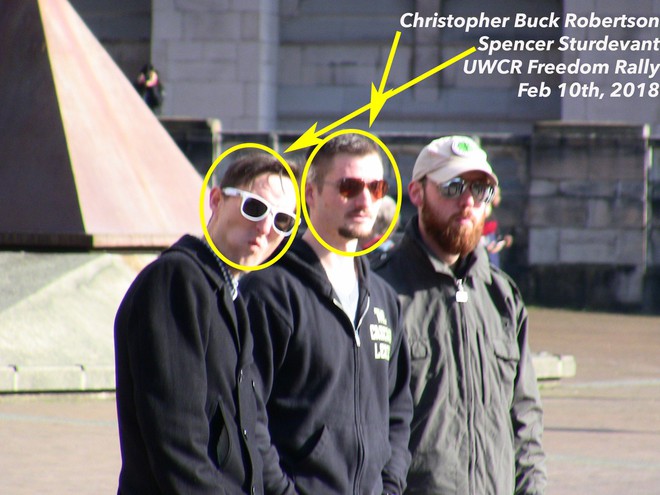 On twitter, Spencer Sturdevant/Niko lets everyone know that he used to be a Marxist, which correlates directly with the time his former friends and online profiles point to his fall to the Right. According to Facebook, Niko and Samantha have been married since 2018, but we know Spencer Sturdevant and Cyan Quinn were married in 2011. Spencer Sturdevant has been helping Cyan Quinn in her effort to organize the North West Forum. 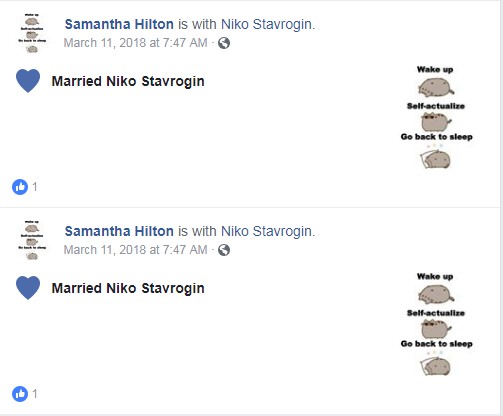 Spencer Sturdevant and Cyan Quinn are dangerous, racist anti-Semites who are bolstering the work of national scale white supremacist and white nationalist organizations here in Seattle and Washington. They bring infamous bigots like David Irving, Nathan Damigo, and Augustus Invictus into our community and cover our neighborhoods with white nationalist propaganda. They advocate for closed borders and are virulently anti-immigrant and anti-refugee. Exposing their double lives is long over-due, and we hope that it helps in keeping them from endangering anyone in the future. 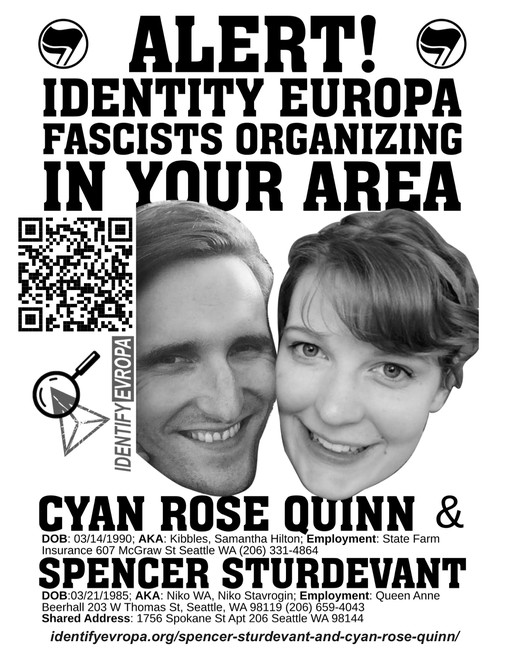