Patrick Casey, the IE leader, announced the name change to "American Identity Movement" late on the Friday night of the conference. While Casey claims that AmIM is a completely new organization, all evidence supports AmIM being a cosmetic rebrand of IE. The rebrand was necessary since IE's reputation is so tarnished by its role in the violent "Unite the Right" rally of Charlottesville, VA, 2017, and also by its association with the broader "Alt-Right." This name change may also be an attempt by IE to evade legal liability, since IE is currently being sued for its role in Unite the Right (UTR). Shortly before IE's conference, communications on their Discord chat server were leaked to the public by the Unicorn Riot journalism collective. 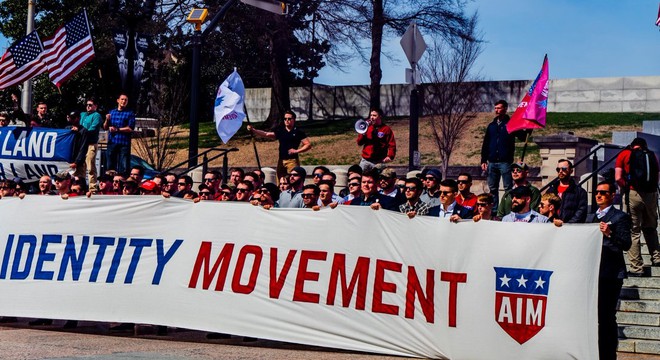 One participant in IE/AmIM is Metro Atlanta white nationalist Jared Alexander Huggins, who seemingly appeared in the crowd at AmIM's rally in Nashville. Huggins has been involved with Identity Evropa–and has been on the radar of antifascists–since 2016. We have mentioned Huggins in passing several times, but until now have not profiled his activity in depth. 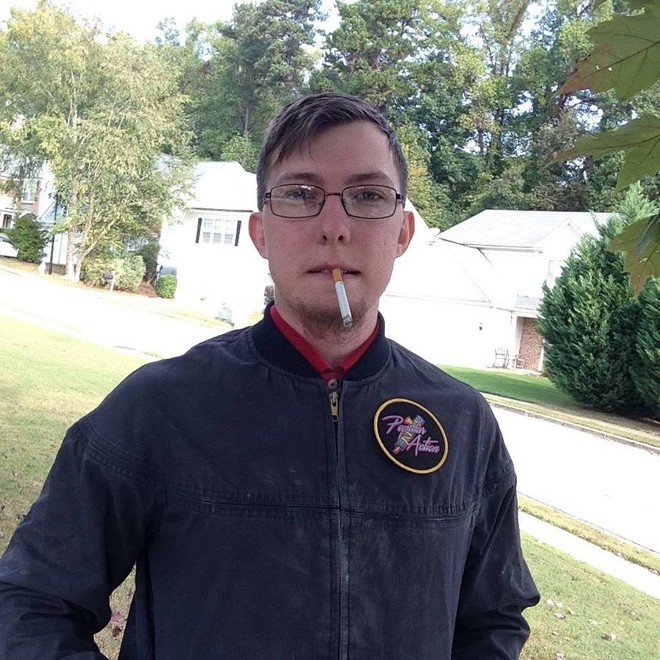 IE/AmIM pretend to be different from Alt-Right white nationalism. The organization now states that it is non-violent. However, Huggins joked about the violence of UTR, which he attended as a member of IE. Huggins also joked about white supremacist James Alex Fields Jr.'s vehicular attack on that day, which murdered Heather Heyer and injured dozens of others. 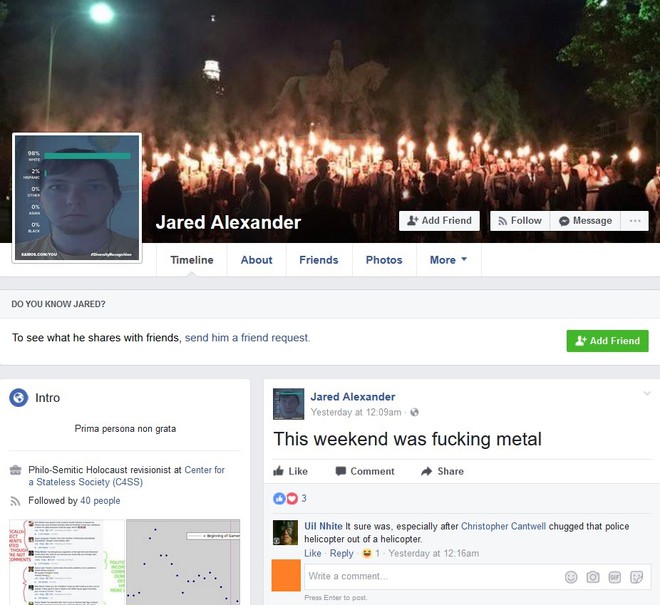 AmIM has also tried to distance itself from the recent Christchurch, New Zealand mosque massacres, even though the organization pushes similar anti-immigrant rhetoric and fear of white displacement as the New Zealand gunman. After mass murder in Christchurch, AmIM issued a single Twitter message with canned language about the New Zealand "tragedy" and about renouncing "violence and terror". In fact, the Christchurch gunman crawled from the same Alt-Right swamp as Identity Evropa/AmIM. Indeed, the European leader of the "Identitarian" movement–which IE/AmIM models itself on–received a large donation from the Christchurch murderer.

On social media after the killings, Jared Huggins circulated a Twitter post that white nationalists should take a stance of "Never defend, always offense" in response. Huggins also retweeted a message beginning, "my heart goes out to the white community of Christchurch", an inflammatory statement designed to mock the murdered victims and anyone who grieves them. An archive of Huggins' Twitter account as "Mordecai McFly"/@FashyScience is included at the end of this article, containing many messages targeting Jewish people, Muslims, racialized groups, immigrants, and women.

Huggins' racist radicalism is a consequence of his deep immersion in the white nationalist scene. We begin our account in 2016, when Huggins first came to our attention.

2016: Libertarian Party of Dekalb County and the Alt-Right

In 2016, Jared Huggins worked with clear white nationalists, Libertarian Party members, and Trump boosters, encouraging overlap and cross-fertilization between these three circles. A photo posted to Facebook in mid-2016 illustrates this overlap. Huggins, wearing a t-shirt celebrating "anarcho-capitalist" Murray Rothbard, sits with Patrick Sharp, who was then best known for his attempted "White Student Union" at Georgia State University and for littering that campus with racist propaganda. Sharp has gone on to become a prominent member of Identity Evropa/AmIM. At the time of the photo, Sharp was also networking with Republican Party activists, trying to broaden his political support. 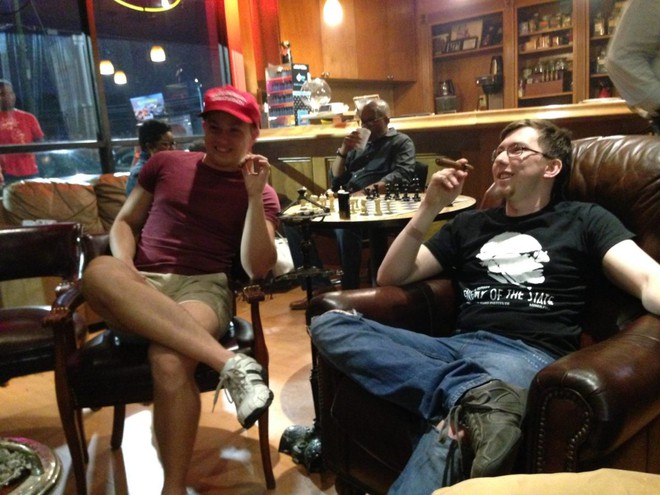 It is unclear when Huggins first met Sharp, but the two must have known each other since at least early 2016. Sharp was photographed at the February 22, 2016 meeting of the Libertarian Party of Dekalb County (LPDC). At that meeting, Huggins–"the newly elected Vice Chair of Dekalb Libertarians"–gave a presentation arguing that "a Trump presidency will be an even greater victory for libertarians than Rand Paul or Gary Johnson."

Patrick Sharp may not have announced his white nationalist sympathies when he attended Huggins' February presentation. However, with Huggins as Vice Chair of the LPDC, the Party would show itself as a safe space for racists. Two months later–on April 25, 2016–the LPDC hosted white nationalist leader and Atlanta attorney Sam Dickson to speak on real estate and gentrification issues, alongside Republican Party activist Greg Jackson. (Both Dickson and Jackson were replacement speakers, as the original guest cancelled.) Jared Huggins was photographed at the event, seemingly introducing one of the speakers. By inviting a notorious white power leader and treating him as a reputable voice in the community, the LPDC normalized racist organizing. This occurred just as Donald Trump was edging toward the Republican nomination and the Alt-Right was beginning to boom. 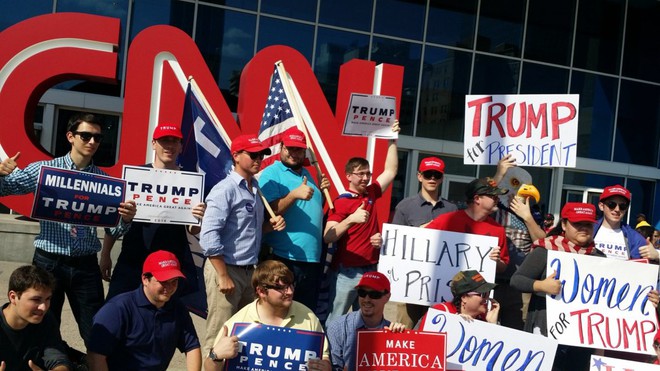 On September 10, 2016, Jared Huggins was recorded as part of an "Alt-Right" group hiking up Stone Mountain. They jeered a passer-by with sexist and antisemitic abuse after she said something about their Confederate battle flag. While part of the Alt-Right racist scene, Huggins continued his LPDC work. He also networked with pro-Trump Republicans, for example attending a late October rally of Trump supporters outside the CNN building in Atlanta. 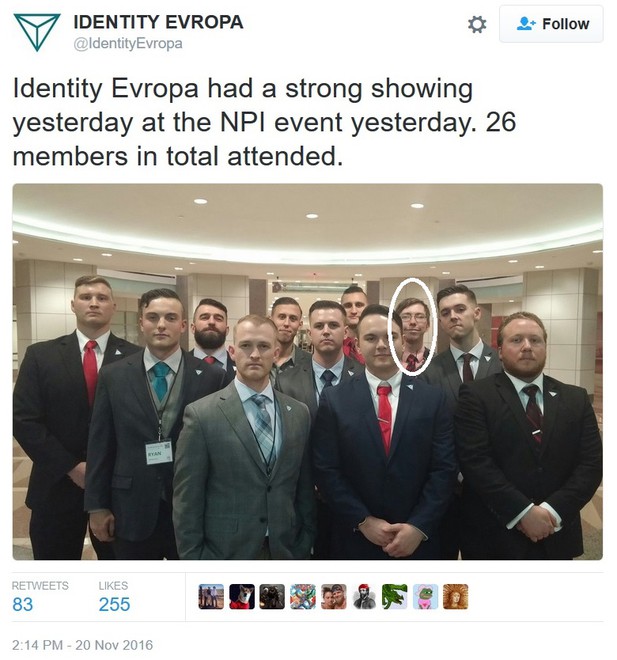 On election night 2016, Huggins attended a party at racist organizer Casey Jordan Cooper's family home in Sweet Bottom Plantation, Duluth. The event was a "who's who" of Alt-Right white nationalism in metro Atlanta. Later in November, Huggins traveled to Washington, DC for the conference of the National Policy Institute (NPI), the major think tank of the Alt-Right at the time. At this conference, NPI head Richard Spencer gave a speech that concluded with "Hail Trump! Hail our people! Hail victory!" and received Nazi salutes from the audience. Upon his return to metro Atlanta, Huggins defended Spencer and the speech, claiming that the media's portrayal of Spencer was an "obvious instance of deception" and that the whole performance was non-threatening, ironic, and fun.

At the National Policy Institute conference, Huggins participated in a group photo for Identity Evropa members, confirming his membership in the white power organization. Huggins seems to have continued with the group ever since then. 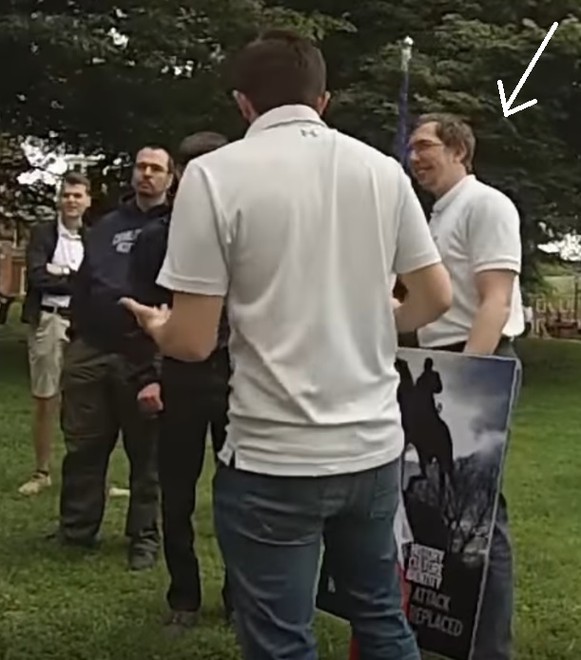 On May 13, 2017, white nationalists held two demonstrations in Charlottesville, Virginia, ostensibly in defense of Confederate monuments. The events were organized on a Discord chat server and were not publicly promoted in advance. The main organizer for the May 13 rallies was Atlanta-based Identity Evropa leader Evan Anderson, who received support from the "ATL-Right," an umbrella grouping for Alt-Right sympathizers in metro Atlanta. The daytime rally took place at Jackson Park and featured speakers such as Richard Spencer and Sam Dickson. Huggins and many of his Atlanta associates attended. That night, the white nationalists gathered at Lee Park for a torchlit rally, where they chanted "Blood and soil!" among other slogans. The May 13 demonstrations paved the way for Unite the Right in Charlottesville three months later. Indeed, the "#SaveJacksonAndLee" protests are frequently referred to as "Charlottesville 1.0", with UTR being "Charlottesville 2.0". 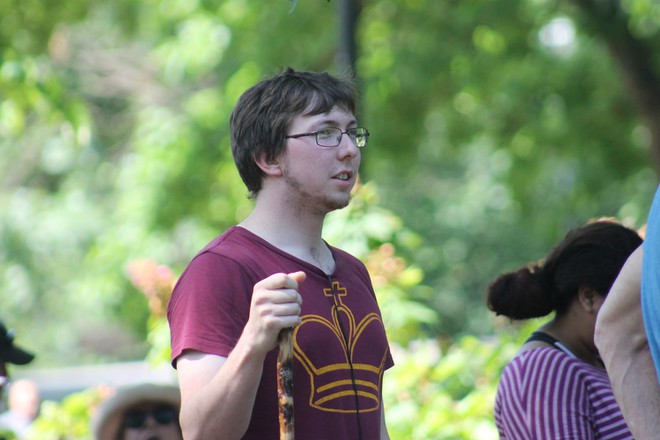 Huggins at "March Against Sharia," Piedmont Park in Atlanta, June 10, 2017

Back in Atlanta, Huggins attended the Islamophobic "March Against Sharia" rally at Piedmont Park on June 10, 2017. There, Huggins chatted with Justin Wayne Peek, a Hitler-celebrating bigot who went on to become Identity Evropa's "Director of Activism" and IE's Georgia coordinator. 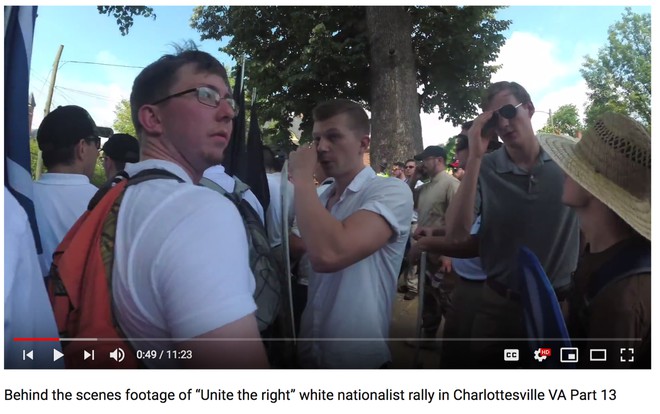 A few days before the Piedmont Park rally, Huggins confirmed on the "Charlottesville 2.0" Discord server that he would attend UTR in August. Huggins is clearly visible in footage from Charlottesville on Saturday, August 12. Later that day, Heather Heyer was murdered and dozens of others injured in a vehicular attack by white supremacist James Alex Fields, Jr. The very next day, Huggins shared his thoughts to Facebook about how everything had gone, writing: "This weekend was fucking metal." Huggins continued to joke about the violence of UTR later that month, when he posted a meme about James Alex Fields Jr.'s murderous attack in response to a Twitter post by Richard Spencer. 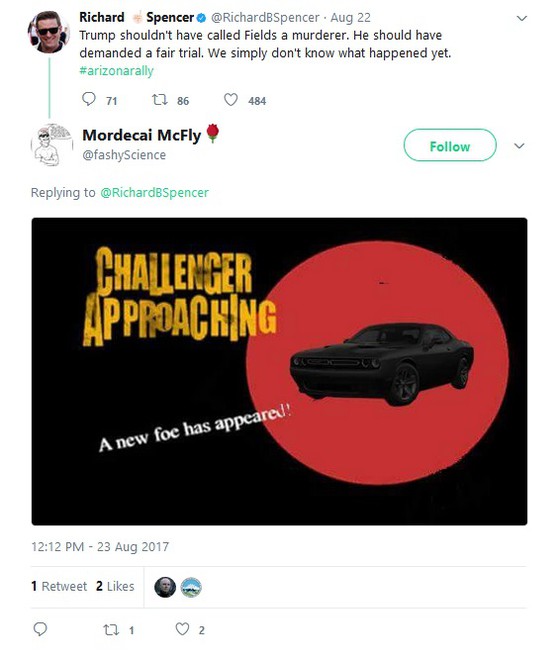 We identified the Twitter account @FashyScience/"Mordecai McFly" as belonging to Huggins after he recorded a video which briefly showed his face, then posted it to the Twitter account. The handle "FashyScience" combines a reference to fascism ("Fashy") with one about science–Huggins studied physics while at Georgia Tech. 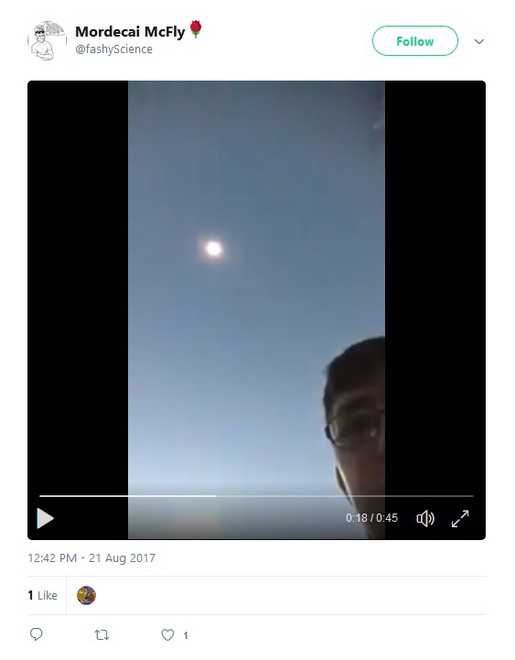 Although Huggins considered UTR to be "fucking metal," he also stayed in Identity Evropa while that organization struggled to distance itself from the racist violence of the day. IE is currently being sued for its role in Unite the Right. As well as changing leadership twice since UTR, IE tried to improve its image by encouraging local groups to engage in acts of "service," which were then photographed and placed on social media. For the IE "Weekend of Service" in June 2018, Huggins was pictured painting over graffiti alongside Atlanta IE members Patrick Sharp and Justin Peek. 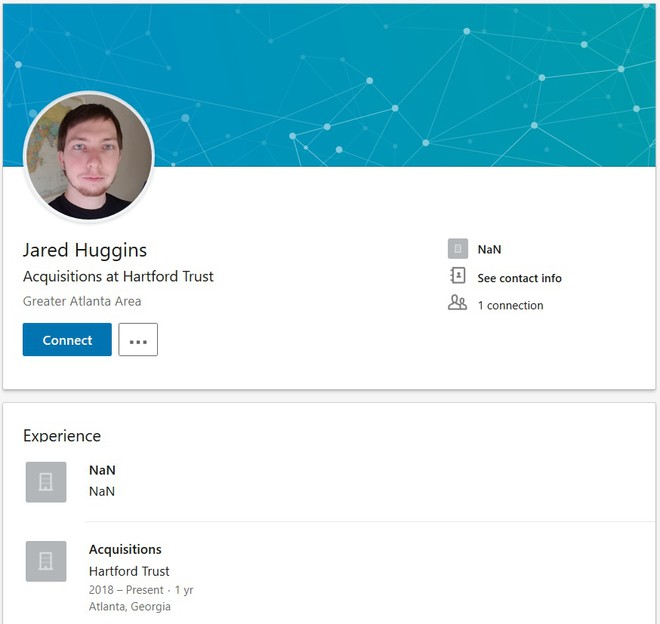 According to his profile on LinkedIn, Huggins started working in "acquisitions" for the Hartford Trust in 2018. This job is a sign of Huggins' entrenchment within the white power scene. We have written a couple of articles about local lawyer/white power leader Sam Dickson and the involvement of Dickson and other white nationalists in the Atlanta property market. Although its exact membership is opaque, the Hartford Trust is yet another business venture linked to Sam Dickson. Fulton County records for property owned by the "Hartford Trust" gives this Trust's mailing address as 512 Angela Street, Key West, Florida–Sam Dickson's "Villas Key West", which he often uses in business filings. Huggins' employment with the Hartford Trust reveals how the Sam Dickson's network can keep people afloat even after being publicly exposed as racist organizers. 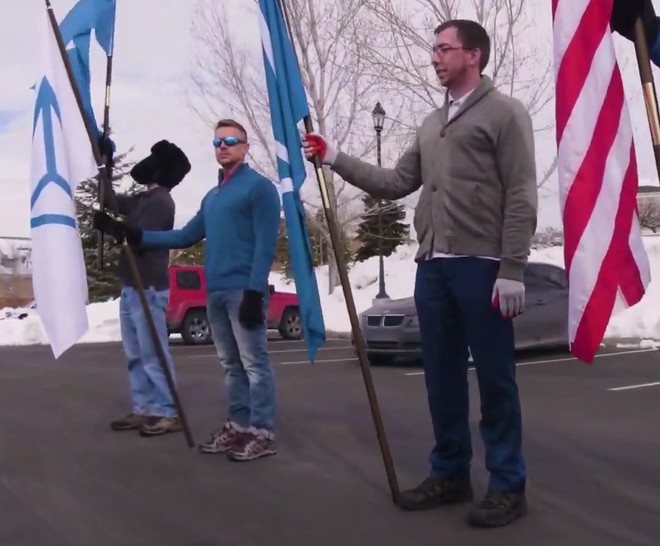 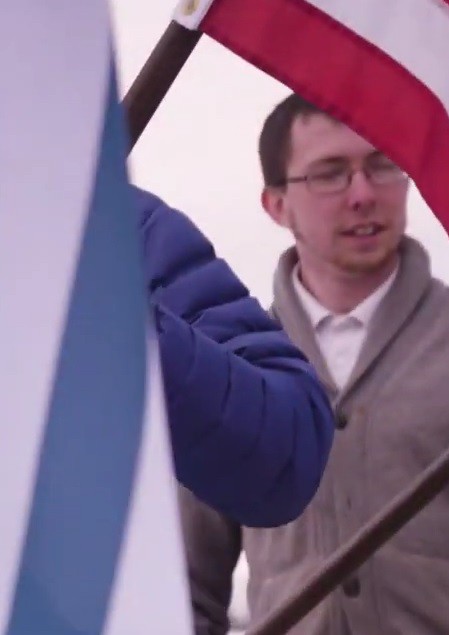 In early February 2019, Huggins traveled to participate in Identity Evropa's "Defend Utah" protests in Salt Lake City, meant as a display against immigration and "progressivism." Under Justin Peek's tenure as Director of Activism, IE has often organized flash protests in areas where they have a core group of organizers, importing members from other locations to boost numbers.

About a month later, on March 8–10, IE held its second annual conference in Kentucky, where it changed its name to the "American Identity Movement." Despite the claims of its leader, AmIM/IE has only changed its name and some imagery, essentially continuing where IE left off. Judging from photos, Huggins participated in AmIM's inaugural protest in Nashville, Tennessee on March 10. Huggins later shared pictures of the Nashville protest on his @FashyScience Twitter account.

Jared Huggins has been active with Identity Evropa/American Identity Movement since 2016. When we first encountered Huggins, he simultaneously operated within white nationalist, pro-Trump, and Libertarian circles. With the election of Trump and the end of the Libertarian Party of Dekalb County, Huggins now devotes his energy to white nationalist organizing. Huggins travels to major Alt-Right events. He was at the bloody "Unite the Right" in Charlottesville, Virginia and joked afterward about the murder that took place. Huggins claims online to be employed by the Hartford Trust, a business linked to white nationalist leader Sam Dickson.

Huggins is now part of the American Identity Movement, which continues the work of Identity Evropa. After fifty worshippers were massacred at Christchurch, New Zealand mosques by a white supremacist, Huggins circulated posts on social media which tried to focus anger on Muslims, immigration and "multiculturalism," rather than on organized white nationalism.

To coincide with the publication of this article, we have mailed over 200 of Huggins' neighbors at the Bloom at Buford Apartments to warn them of the white power organizer living nearby. You can download our flyer about Huggins here. 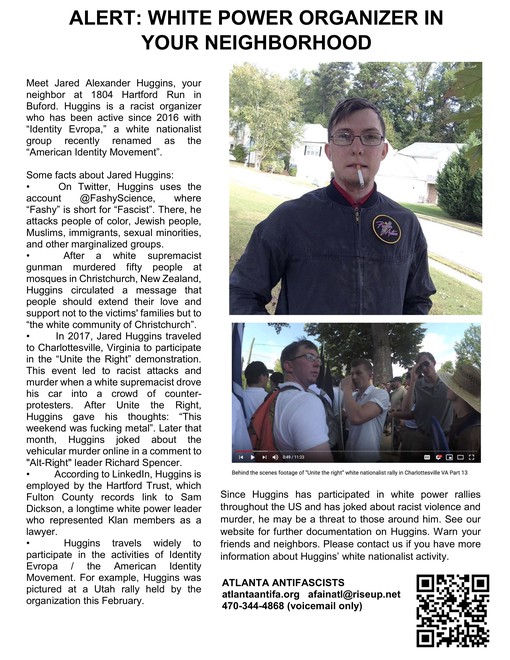 If you have more information on Jared Huggins or other members of Identity Evropa/American Identity Movement, please get in contact.

Download Twitter archive here. Note: We redacted an image of the aftermath of the Bataclan theatre massacre shared by Huggins.