Ignacio Gomez is a Spanish white nationalist and dues paying member of the white supremacist group Identity Evropa which has recently rebranded itself as "American Identity Movement." Gomez participated in the member-only Discord chat for the group using the moniker "Nick_Knight." Ignacio Gomez lives in Bethesda, Maryland- a short commute away from Leesburg, Virginia, which houses the Iridium operations center where he works at Boeing. Ignacio Gomez is married to Rachel Scarr, a DC area realtor. According to his Instagram, Ignacio frequents Blue Ridge Arsenal in Northern Virginia for "gunplay." Antifascists continue to identify numerous members of Identity Evropa members since their internal Discord and Slack chats were publicized by the independent media group Unicorn Riot. 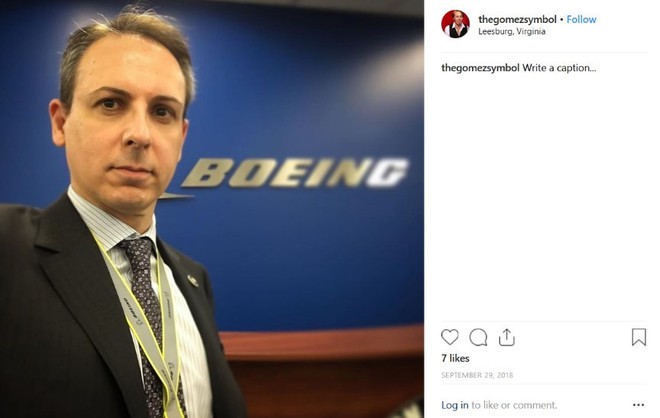 Oooh I got this one! "Just got fired for being a white nationalist!" #byeBoeing

"Nick_Knight" has relatively few messages within the chat but does provide some clues to his identity. A message from January provides a link to a Twitter post in the "cyberstrike" channel, in which Identity Evropa members shared social media posts they wished to spread or attack. The link leads to a Twitter thread by "thegomezsymbol" proliferating false claims about the Covington Catholic harassment scandal. The thread makes use of the anti-Semitic echoes, three parentheses surrounding phrase, used by the alt-right. It is not immediately apparent that this Twitter account belongs to "Nick_Knight," but he offers some additional proof in the Discord chat. On January 21st, 2019, he writes on Discord that "@ Barnes_Law (a Twitter account operated by Robert Barnes) is asking for screencaps of threats to the kids to start." The aforementioned Twitter account retweeted a post by Jack Posobiec which promotes the claims made by Robert Barnes. The Covington Catholic incident received a multitude of attention on the Identity Evropa Discord and "Nick_Knight" announced that he had "Been posting about this all weekend long on Twidder." This message was sent on January 21st, when "thegomezsymbol" was sharing a slew of posts regarding the scandal. One can also take note of the purposeful misspelling of Twitter (Twidder) in the Discord message. "Thegomezsymbol" uses the same intentional misspelling in a post on January 22nd, and in a handful of more recent posts. 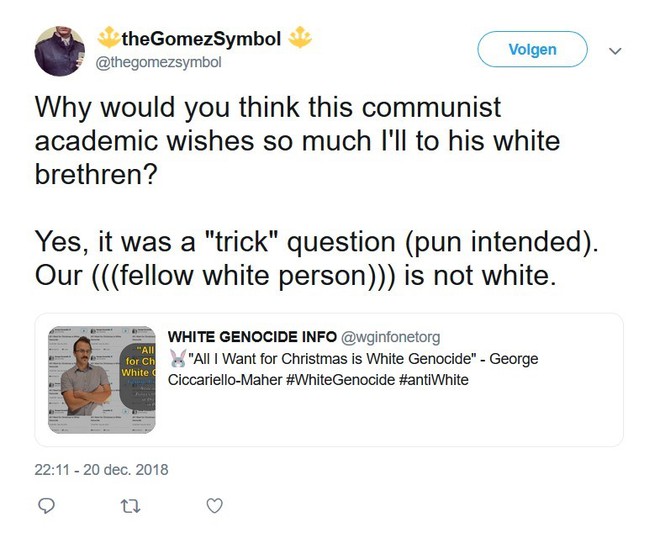 An archived Twitter post by thegomezsymbol makes use of the anti-Semitic echoes and proliferates the white genocide conspiracy theory which has inspired violence. 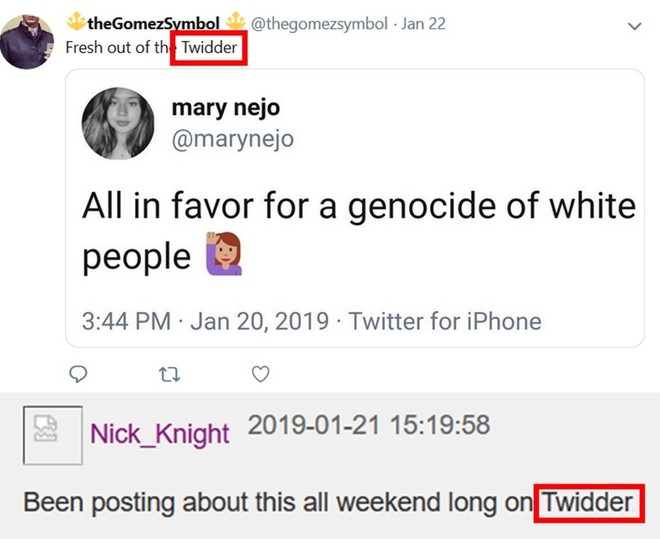 According to his LinkedIn account, Ignacio is the manager of the Iridium Mission Control systems and is employed by Boeing. Boeing has had problems with white nationalists in the past. Identity Evropa member David Fanelli, exposed by Panic in the Discord, was also employed by the company. Violent Proud Boy Nick Boling was also a Boeing employee, and was profiled by Rose City Antifa. Ignacio has made a number of posts on LinkedIn, including one which claims that diversity training is counteractive and includes a sham article published on Psychology Today. Other posts cement the connection between Ignacio Gomez and his pseudonym, "thegomezsymbol." In one, he shares an image of himself on the Iridium 6 launch site. The same photo was uploaded to his Instagram account in May of 2018. He also posted pictures of his certificate provided by the FBI for completing the Citizens Academy, something he flaunts on Discord as "Nick_Knight," and Instagram under his pseudonym, "thegomezsymbol." 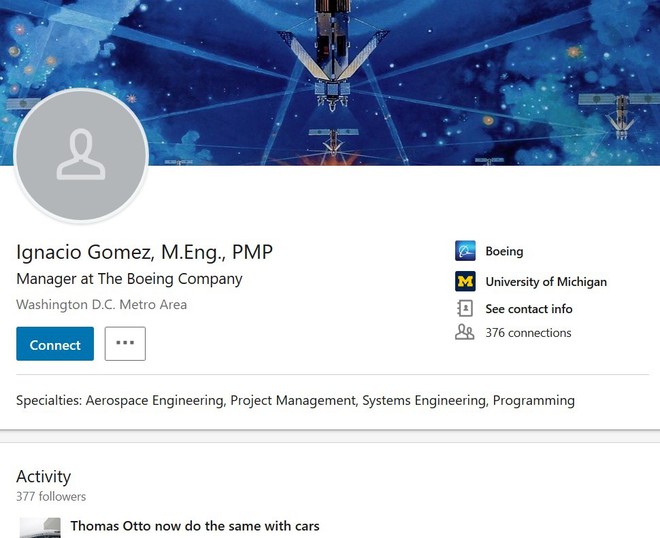 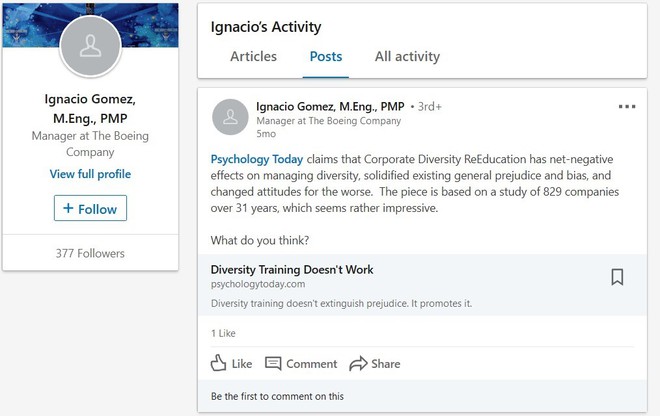 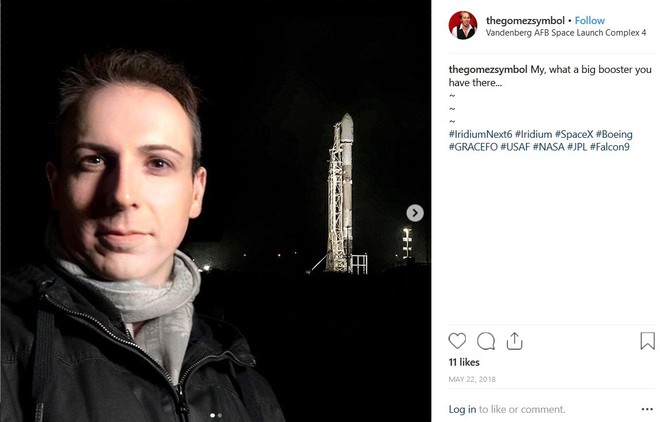 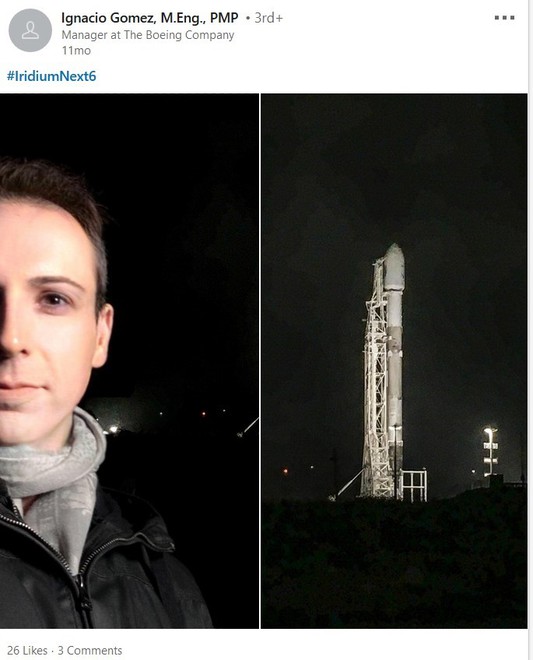 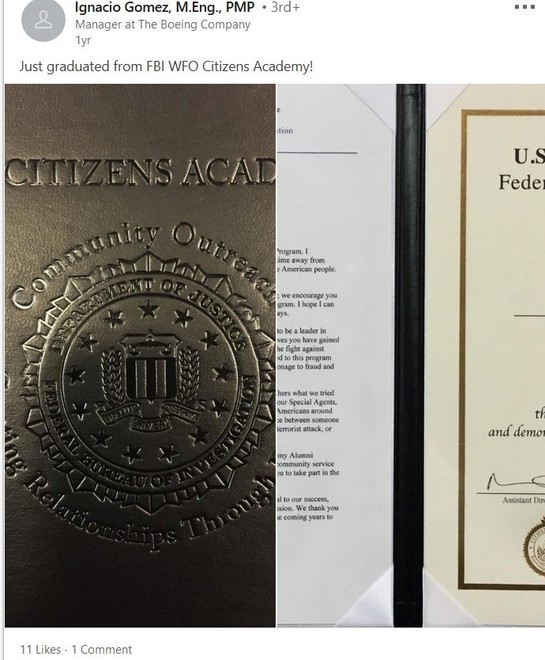 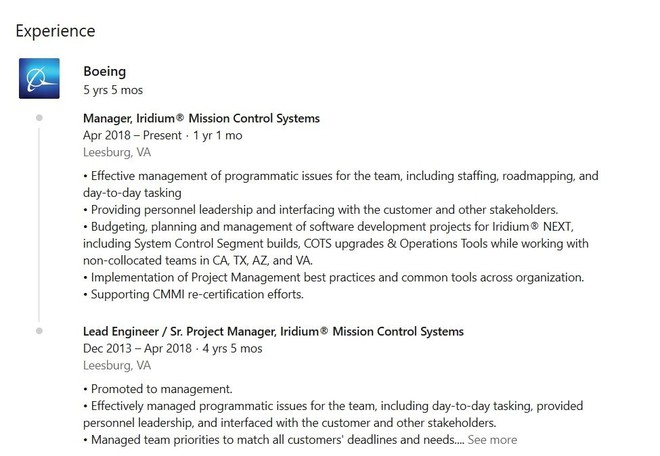 A description of Ignacio's tasks at Boeing

Ignacio Gomez employs the username "thegomezsymbol" across multiple platforms. He has an Instagram account with hundreds of posts, including the same picture which is used as his Twitter profile picture. Another picture features a formal Ignacio inside the FBI Headquarters, where he participated in the WFO Citizen's Academy. He also mentions the FBI on Discord, responding to Lawrence of Eurabia (Jay Harrison): "Lawrence, the FBI uses the SPLC as their source of info for hate groups, for their civil rights protection group." He claims that he knows this because he participated in an outreach program offered by the bureau. His Instagram also reveals that he has an unhealthy obsession with weapons, boasting of his expansive armory. He alludes to his occupation in several posts, using hashtags like "Team #Boeing," and sharing logos for "Iridium Next" launches.

"Nick_Knight" was at an FBI outreach program approximately one year before he sent this message. Ignacio Gomez was as well 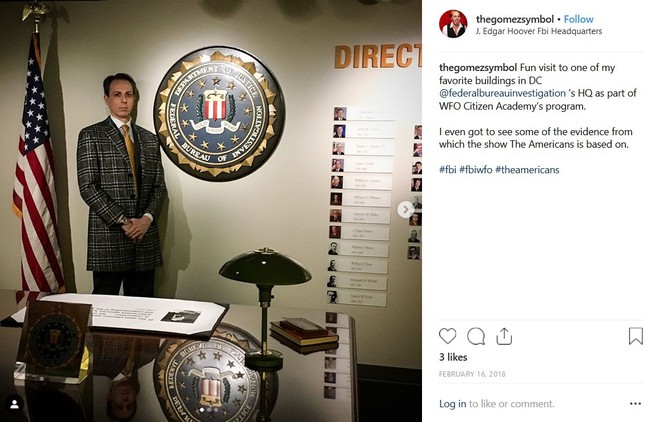 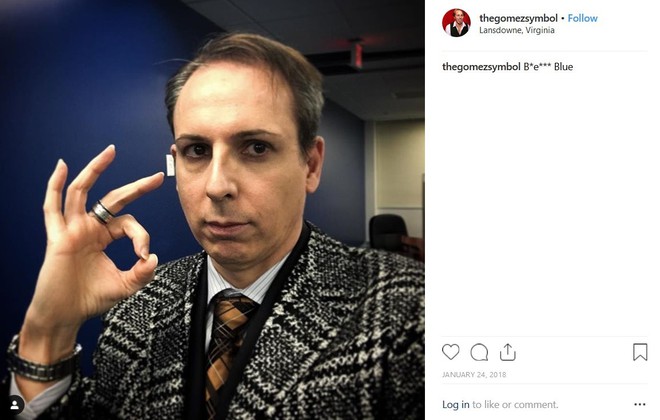 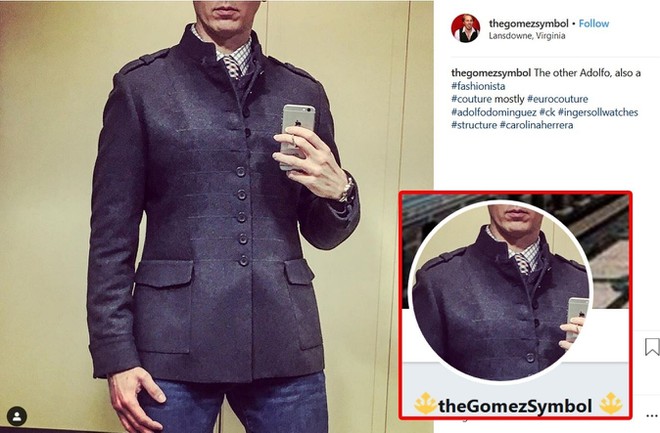 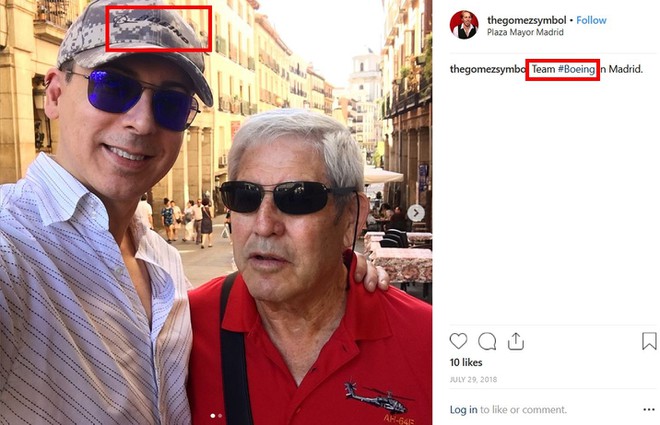 In the Identity Evropa Discord chats, "Nick_Knight" sends a picture of a large protest occurring in Madrid, Spain. He calls the protest a "whitepill," a term used on the Identity Evropa server to describe virtually anything that is considered to create appeal for white nationalist ideas. The protest pictured was a right-wing protest which featured the violent far-right party Vox and opposed the ongoing Catalan independence movement. "Nick_Knight" provides additional background on the image, prefacing it by stating that his father attended the demonstration. Ignacio Gomez is Spanish and references his family in Spain in a decade old blog on the website LiveJournal. The Twitter bio for "thegomezsymbol" contains both an American flag and a Spanish flag as well.

"Nick_Knight" writes that his dad attended a protest in Spain. "Thegomezsymbol" has a Spanish flag in his Instagram bio 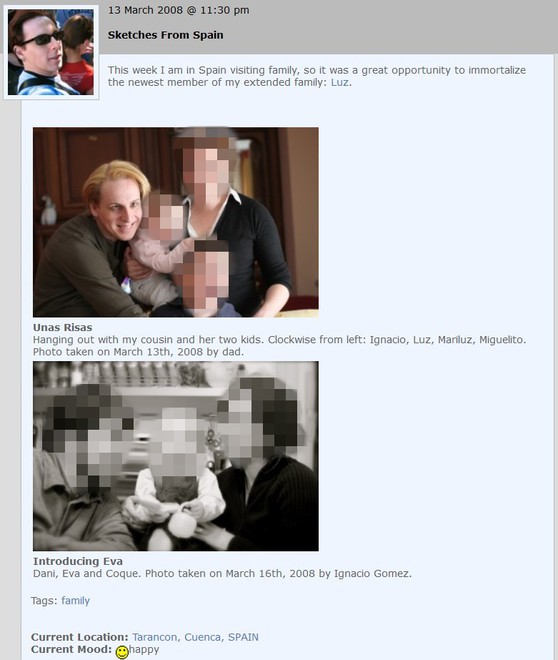 Ignacio Gomez has family in Spain, according to a decade old blog

In a Discord discussion about optics, "Nick_Knight" praises two alt-right Twitter users for their rhetoric. One of the accounts he plugs is "rising_serpent." We can see that "thegomezsymbol" also appreciates this account, as he follows it on Twitter. "TheGomezSymbol" posts frequently on Twitter, echoing "white genocide" and "reverse racism" talking points similar to those expressed by the Christchurch attacker, Brenton Tarrant, in New Zealand. "Thegomezsymbol" previously listed his Twitter location as "The Republic of Kekistan." This is an obvious reference to the alt-right dogwhistle and meme often found littered throughout online forums and at far-right rallies (After locking his Twitter, he changed his location to "everywhere." Nice try Ignacio, but we are the only ones "everywhere"). 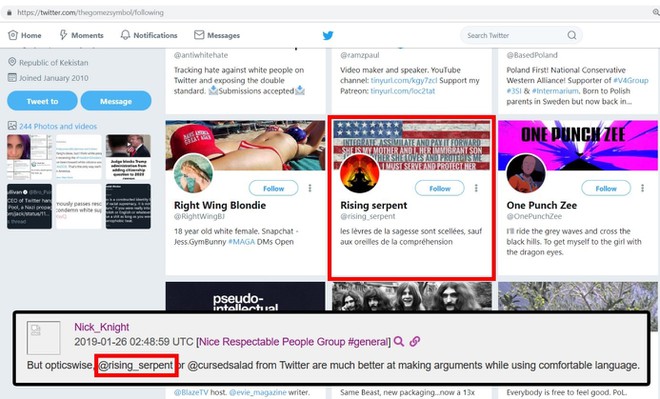 "Nick_Knight" and "Thegomezsymbol" have a similar taste in alt-right Twitter users!

tHaT's rAcIst aGAiNsT wHiTe PeOPlE!11!!!!!1! Using the "echoes" really helps you seem like the not racist one

Andy Ngo, a Portland, Oregon based propagandist, is popular among the alt-right for his a-factual news stories that play into broader ideas pushed by the alt-right 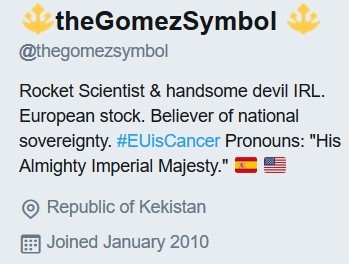 "Republic of Kekistan" is a weird way to spell "Bethesda, Maryland"

Ignacio Gomez also appears to be a participant on alt-right websites. He is on Gab, the Nazi-infested, mass murderer-incubating, "free speech" platform. His uses his trusty "thegomezsymbol" and has had the account since 2017. There are no posts on his account, but the users he follows speaks volumes. One user has "88" in their username, a numerical code utilized by neo-Nazis which translates to "HH" or "Heil Hitler." Another user, "Lord Molyneaux," sports the black sun in his cover photo. The black sun is recognized widely as a hate symbol and was derived from its use by the Nazi party and SS. Gab resurfaced thanks to Seattle area alt-techie Rob Monster after the site was deplatfromed when Gab user and anti-Jew terrorist Robert Bowers killed 11 worshippers at the Tree of Life Synagogue. Ignacio has also logged comments on several alt-right blogs as "thegomezsymbol," including the blog of Gamergate purveyor "Thunderf00t." Comments from as early as 2012 indicate that Ignacio was engaged with the far-right ecosphere online. On YouTube, he is subscribed to the usual suspects, such as anti-feminist mouthpiece "Sargon of Akaad," who has a sizeable fanbase on the alt-right because of his similar rhetoric. 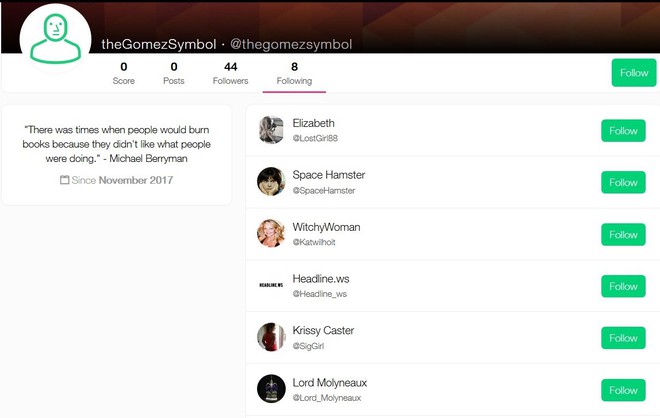 Ignacio Gomez is on Gab, following troves of neo-Nazis and white nationalists 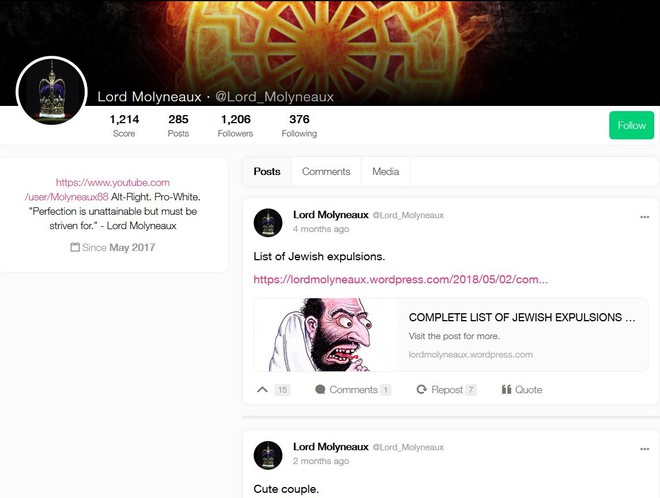 The Iridium Next Mission seeks to replace and upgrade the Iridium satellite constellation, which provides voice and data communication across the entire planet. Boeing works closely with other Iridium partner corporations, namely Space X and Northrop Grumman, to oversee and streamline the mission. Ignacio lists on his LinkedIn account that as manager of the Iridium Mission Control Systems, a position which he assumed in April of 2018, he is tasked with staffing, managing issues, and providing personnel leadership. It is concerning and worrying that Boeing employs a white nationalist in such a role. Ignacio Gomez is a dues-paying member of Identity Evropa, a violent hate group that was quintessential to the 2017 Unite the Right rally. It is likely that he is also a member of the rebranded group, the American Identity Movement (AmIM). We deamnd that Boeing sever all ties with this dangerous white nationalist immediately. You can contact the company here: